Oscar Niemeyer was a revolutionary of modernism, with an architectural language characterized by audacious curves and elaborated structures. The Brazilian architect established an architectural vision of a future utopian Brazil, one that ultimately has not come to pass. While public attention is often drawn to his masterpieces in Brasília, somewhat hidden from the architectural discourse is a house that Niemeyer designed for himself; a colonial-style scheme offering a radical departure from the expressive forms of his more noted works.

The house, which Niemeyer designed for his own occupation, strikes a pleasant, "countryside" ambiance, with a modest expression counterbalancing the opulence of his more public works. To this point, the 66th issue of the Habitat magazine, released in 1961, describes that “in the house, there is nothing from the Brasilia builder, except for the revelation of the human side”.

The single-story scheme has a rectangular plan and an area of 563 square meters, situated on a plot of 100x200 meters. The exterior is defined by a white facade, a hipped roof clad in red ceramic tiles, and seven doors that open to two wide verandas, protected by a series of three-meter-long eaves. In addition, twelve identical floor-to-ceiling mullions are arranged at equal distance, highlighting the residence geometric order while also allowing the garden to be seen from the inside. As a whole, the house can be described as a modern representation of Brazilian colonial architecture, contrasting heavily with the principles defended by Niemeyer during his career.

Despite the apparent contradiction between the project in question, and the defining principles of its architect-come-resident, there is a possible explanation for this architectural anomaly. In the beginning of Brazil's colonial period, when Portuguese residences were adapted to tropical conditions with new techniques and materials, the resulting architecture became more simple and stripped a lot of Portuguese mannerisms, simplifying and maintaining only essential characteristics. This adaption, intricately studied by Lúcio Costa, demonstrates how these conditions resulted in a more rational architecture, not dissimilar to the modern principles of architecture which architects such as Niemeyer championed. This evolution influenced the architectural development of the entire country, which leads to the rational thought of Niemeyer, on a modest scale, was connecting with a modernist interpretation of the historical language brought by the Portuguese.

The text published in Habitat magazine no. 66, also revealed how the house demonstrated Niemeyer's “low intimacy with conventional construction procedures”, citing how the porch drained rainwater into the veranda, leading to flooding on rainy days. The text also identifies examples of the modern architectural methods more associated with Niemeyer, such as the irregular design of the pool, and occasional roofs made of zinc.

Perhaps Niemeyer foresaw and concurred with the words of Clarice Lispector, who said that “Brasília still doesn’t have the man from Brasília." Perhaps instead, for himself, he created a residence whose scale embraces the man that couldn’t fit himself into the imagined utopia of the Brazilian capital.

Today, the house is used as a space for contemporary art from the Brasília University and is open to the public. To learn more about the institution, visit the house's Facebook page or the official Instagram profile. 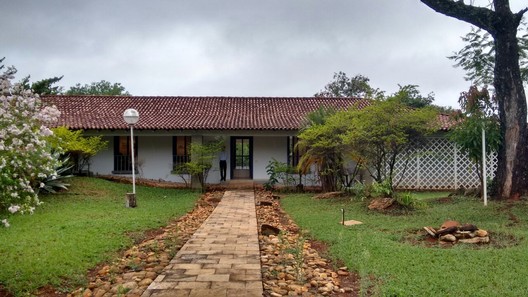