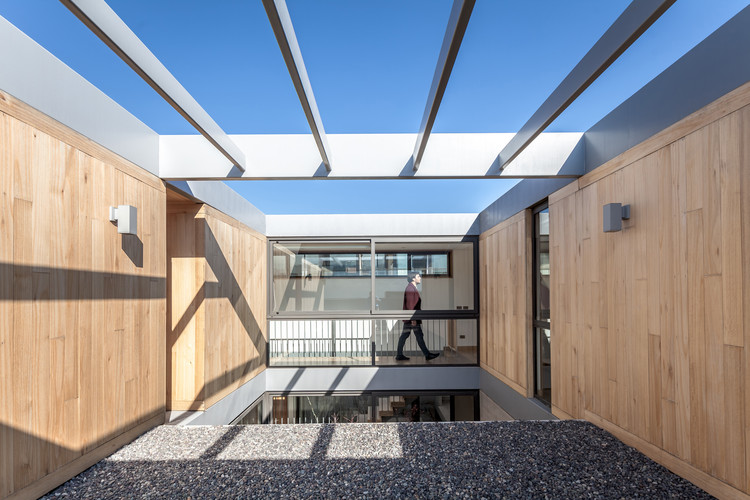 Text description provided by the architects. According to the area of ​​the land, and in order to favor a lower occupation of floor that allows a greater area of ​​patio / garden, it is defined the distribution of the order on two floors, concentrating the common spaces of being in first floor and private areas on a second level.

Complementary to this and in response to the recognition of an almost flat terrain, with high exposure to solar radiation, surrounded by a mountainous geography, typical of the northeastern area of ​​the city of Santiago; It is developed as a principle to work a superior body of hermetic and very synthetic condition, under a wall-volume support relationship, which in its eastern projection builds different spatial situations; the relation of access and closing towards the street and the central inner courtyard in double height; hierarchical space that orders, relieves and articulates the programmatic resolution.

At the same time, the framing is worked with the presence of a linear staircase as a leading element that accompanies the translucent route of transfer of the house, distributing and giving spatiality to the circulation circuit.

Structurally the project is composed by means of a defined basement in reinforced concrete walls, on which the upper volume rests; a 400x50x4 grid metal grid that frames the edges of the rectangle; within which random movements of interior bodies are generated that give dynamism, depth and movement to the formal expression of the house.

In relation to the materials, the use of noble natural materials such as travertine marble, local stone and eucalyptus wood treated with Cutek natural primer was privileged; elements that give the project the necessary warmth as opposed to the structural elements of concrete and steel; Neutral and cold expression materials.