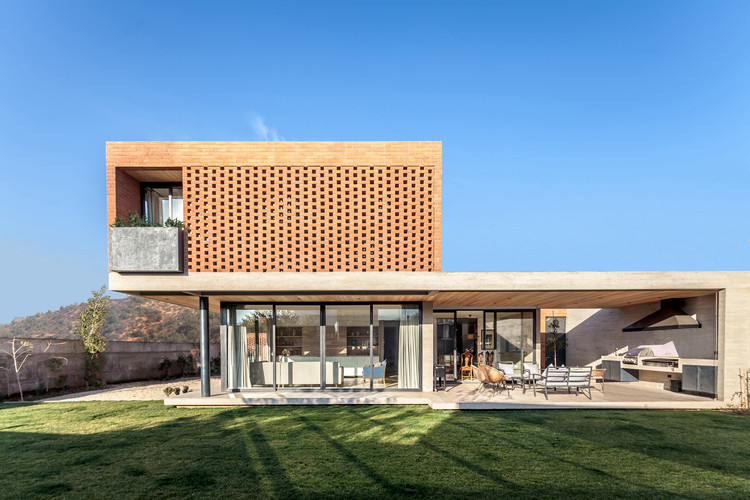 Text description provided by the architects. According to the land area of the land, and in order to favor a lower occupation of land that allows a larger patio/garden area, it is that the programmatic distribution of the order is defined, concentrating the common spaces on the first floor and the areas private on a second level.

Complementary to this and in response to the recognition of an almost flat terrain, with high exposure to solar radiation, surrounded by a mountainous geography, typical of the northeastern area of the city of Santiago; It is developed as a principle to work a superior body of hermetic and very synthetic condition, under a wall-volume support relationship, which in its eastern projection builds different spatial situations; the relation of access and closing towards the street, the inner central vacuum in double height and the gap of the lower level as an eave mode that constitutes the shelter and containment for the first-floor interior enclosures.

At the same time, framing is worked with the presence of a linear staircase as an element that accompanies the transfer route of the house, distributing and giving spatiality to the circulation circuit. Structurally the project is composed of means of a defined basement in reinforced concrete that supports the chassis of a light mezzanine slab, on which the upper volume built-in Ecowall panels is composed.

The transition between these two elements occurs through a continuous perimeter beam as an orthogonal ring that borders the masonry and allows the upper body to be possessed generating the unity and continuity that is sought. In relation to the materials, the use of brick and veneer was favored, worked under the same format, 29x7cm and finished, rustic sandblasted; decision that allowed to improve the energy efficiency of the upper level, reduce construction costs, and the possibility of maintaining the formal homogeneous character next to the work of grain, permeability and transparency of the skin. 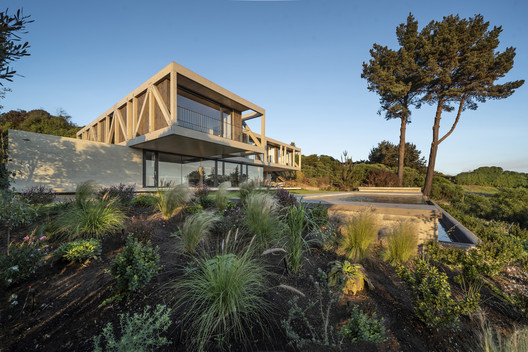