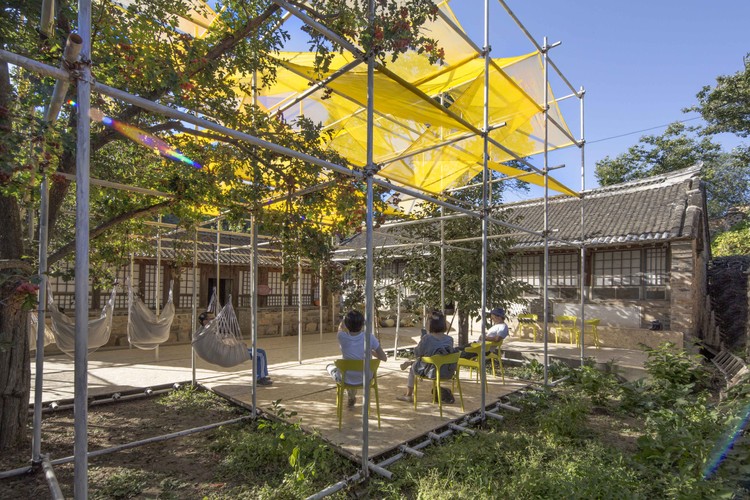 The Origin
Shichengzi village, located in Qinglong County, Hebei province, is the main venue of the 2019 Chinese farmers' harvest festival in Hebei province. Temporary gallery facilities were needed to hold the theme exhibition of the harvest festival, and a temporary media interview and guest rest center were designed in an idle farmhouse. The original exhibition was arranged on the side of the main road of the village in a propaganda manner, but this method could not display the exhibits well.

Neither integrates well with the village space. We propose combining the exhibition of the alleyways inside the village, which as a result not only has a relatively sophisticated exhibition space but also attracts tourists to the village and fully perceives its distinctive rural space. The media center is located in an indolent farmer's house with local characteristics, which is relatively quiet and has been briefly renovated for temporary rest and meeting. All these facilities would be dismantled after the completion of activities. Thus the impact on the environment of the village could be minimized.

Materials and construction
Due to the limitation of time and money, the exhibition corridor needs at minimal cost, fast construction and recycled way of construction. As the village is located in the remote mountain area, the material could hardly be purchased from the county, thus there was a very narrow material palette left to work with, and the construction process of the main work also can only rely on the villagers to achieve. In this way, we then found out that the scaffold is almost the best and the only option to meet the above requires at the same time.

Scaffold is the most typical reusable material, with standardized components, various forms, and extremely convenient construction process. According to the existing steel pipe specifications from the scaffold leasing station, we designed a module system for the scaffold gallery, which can be built quickly according to the village public space without any impact on the existing environment. And we chose the common safety mesh which often used together with the scaffold as sunshade and decoration materials of the installation.

Safety mesh has gorgeous color palette, and its material has a great range of specification, we chose the most common polyester federated mesh, enabling customized color and light transparent texture, which could achieve a unique hazy aesthetic effect when combined with a scaffold exhibits corridor. The safety mesh has a fixed size for the finished product; thus the scaffold installation was modified to fit the mesh. On the construction site, nylon plastic binding belt was utilized to complete the connection between the safety mesh and the scaffold, realizing the fast installation process.

The whole exhibits corridor installation was completed in just less than two days. This temporary exhibit installation made by scaffolds painted orange with orange safety mesh is like an orange ribbon, softly spreading in the village. The low-cost by-product in conventional construction process, the scaffold, has become the art piece itself, showing a fresh new look. Its original coarse materiality was mildewed with the vivid hazy safety mesh to set off the contrast.

In addition to scaffolds and safety mesh, the media center also employed OSB board to serve as a temporary paving material for ground floor. OSB board has high intensity and low price, with downy and plain texture, which can be paved on site after very simple woodwork. The whole compound was quickly set up in a week.

Alleyway exhibits corridor
The alleyway gallery adds a layer of hazy and illusory skin to the roadway. The gate of the farmhouse on the alley facade was originally a node dividing "inside" and "outside". The independence of the gallery space makes the gate become the defining node of "inside" and "outside" of the gallery. What used to be a traffic space has been transformed into a communal space where farmers, tourists and even tofu vendors in the village stop by. The gallery appears in different sections in the roadway, sometimes hidden, and sometimes undulating, where the sunshade through the orange mesh echoes the scattered roofs of the folk houses.

The mill gallery
A mill in the lane of the village has been abandoned for many years. This mill was originally the most intimate place in the daily life of Shichengzizi villagers. With the change of local economy structure and production mode, the mill was not so busy as before. We planned a small photo and image exhibition entitled “primitive nature in spectacle current”.  The exterior scaffolding extends through the doors and windows inside of the mill. The orange steel frame system interweaves with the old mill buildings, showing the images of the life of the villagers at present. The new and the old collide directly with each other in a natural and harmonious way.

In the gallery space outside the mill, we planned a children's exhibition entitled "rock is sweet". Rural revitalization is not just the change of industry and income, but also should bring more care to rural children. Similarly, the harvest festival should not only be a performance for adults but also set aside a stage for children in the countryside. The revitalization of the countryside is ultimately the revitalization of people, and children represent the future of the countryside. We contacted the village primary school, which has only 28 students, and took a series of photos of local children. We collected the paintings of each student and displayed them in the gallery. The childish brushwork of the children became the most beautiful art in the gallery of the harvest festival.

The media center
The media center is an old house with distinctive features in the village. The construction of the temporary media center not only needs to meet the interview demand during the harvest festival, but also provides a window for a large number of courtyards in the village to display and promote to the outside world through the display of this courtyard, so as to seek the possibility for the old courtyard to regain its vitality. As it is a temporary facility, it needs to be completely dismantled after the festival without any damage to the old courtyard.

The entire scaffold system is designed to be nested in the courtyard. Inlays in the alley entrance after a first scaffolding promenade, make into the yard of the ceremony are reinforced, new building, in the form of completely independent and between the architecture and traditional architecture and natural environment to get the maximum retention, in the industrialized, comparing to the style of the scaffold traditional space has become more recognition, people's collective memory of the traditional space be preserved, and emphasized by opposing structures.

In the past rural weddings, funerals and many large-scale activities require the makeshift tent, many big cities such as Beijing and even has a "tentman" as the folk professional, some large festival activities to build large temporary arched, now although "tentmaker" this traditional industry has not, but many will still need to set up temporary tents, scaffolding often appear in many temporary structures, scaffolding workers became the "canopy".

After the transformation of the courtyard revitalized with interesting special change under safety mesh and scaffold. The old courtyards, which have long been slept inside the remote mountain, declared their own value with this kind of almost art way of intervention and insertion of new programs.

Episode
Rural revitalization not only reflected in the demand for increasing production and income, but more is to break through the limitations of the inherent ideas. In the choice of the form for rural renovation, antique style seems to have become the noble and “root password” in many construction projects. In the implement process, the scaffold exhibits corridor was one time halted and asked to be removed. This material, with an image being common temporary construction materials, doesn't seem easy to be accepted by rural authorities. As a not so avant-garde design scheme, scaffold installation on the harvest festival encountered challenges, because using pumpkins and corn to pose all sorts of modelling was perhaps the standard answer for the harvest festival. However, due to various limitations of time, materials and labor, the scaffolding gallery has become the key to the final implementation as it was the most cost-effective practical choice. This episode also reflects the current situation of rural construction.

Impact
Exhibits corridor and the construction of the compound at a low cost and fast speed cost less than ten thousand yuan. Despite that the implementation of scaffolds lead by professional workers, all other jobs are done by villagers. Safety mesh and panel installed with nylon tie belt, that ordinary villagers without experience can install fast and conveniently. The abandoned mill has been restored to life, and the old stone mill has been pushed by visitors again. History and future are interwoven in the new mill gallery space. After the festival, all the constructions are detachable and recyclable. Nothing is left. The alleys are still quiet and the stones are still warm. This is the industrial age we can give this mountain village the most sincere warmth. 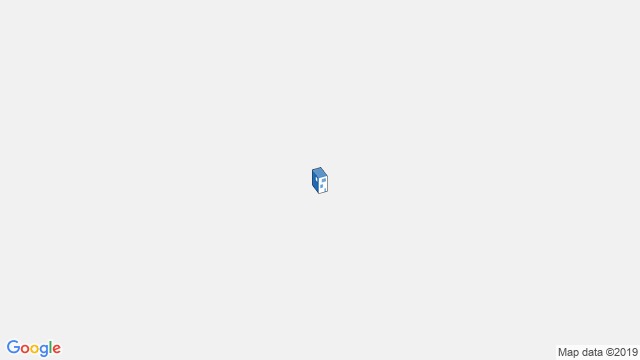 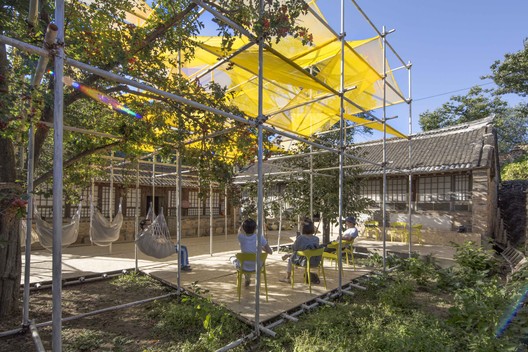