Works started on Sanpellegrino’s “Factory of the Future”, designed by BIG-Bjarke Ingels Group on the brand’s 120th year anniversary. Scheduled to open in 2022, the new production plant will showcase high levels of innovation, technological advancements, and social sustainability. 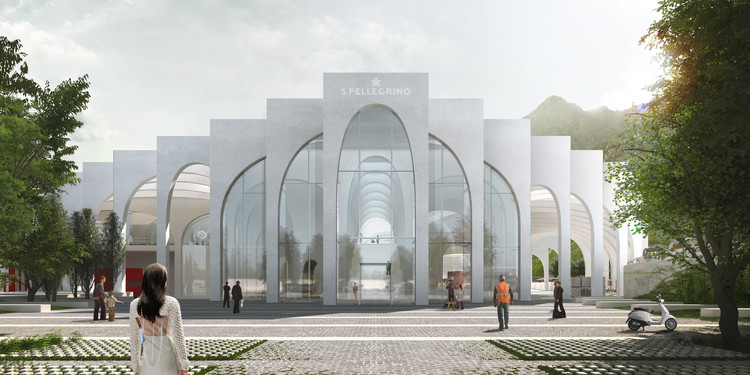 Today we lay the first stone of the Future Factory that will officially launch us toward the future, a gem of design and innovation capable of attracting tourists from all over the world. The philosophy with which the new structure is created best represents the values of the brand and the commitment of the ‘Made in Italy’ ambassador company: telling an extraordinary and non-relocatable asset like S.Pellegrino mineral water, generating value shared with the communities where we operate, improving the quality of work for our personnel. -- Federico Sarzi Braga, Sanpellegrino Group Managing Director

Enhancing the touristic aspect of the Lombardy region in Italy, and strengthening its status as a global hub, the project, which involves the territories of San Pellegrino Terme and Zogno, has a design that will blend with the surrounding landscape, creating a building for its personnel, the local community and the international touristic scene. The “Factory of the Future”, promotes the territory and improves the quality of the produce. The production plant’s concept will put in place an immersive experience that will welcome visitors from all over the world. In fact, new accesses and infrastructural systems were drafted, with the creation of an entrance bridge to the facility, in order to reduce heavy vehicle traffic through the inhabited center.

Like the mineral water itself – the new San Pellegrino Factory will appear to spring from its natural source, rather than imposing a new identity on the existing complex, creating a seamless continuity between the environment of production and consumption, and preparation and enjoyment. – Bjarke Ingels, Founding Partner, BIG

Regarding the innovative design of the plant, BIG created a series of exposed architectural concrete arches that will frame the factory, and offer a view of the Orobie Alps. The facade of the project will be covered by a glass surface that will be symbolically reminiscent of the various physical states of water. Offices and changing rooms will undergo a complete renovation, and a new company cafeteria, break area, and fitness center will be added. Sustainability, part of the company’s policy is achieved through photovoltaic panels, high energy efficiency systems, and water recovery systems for rational consumption of water resources.

On another hand, the production plant will require a total investment of €90 million in civil works, systems for the production and logistics department, as well as for expending the project and creating the 2,800 square meters of new spaces dedicated to production operations, that will ensure the ability of the company to handle the increased production predicted for the coming years.