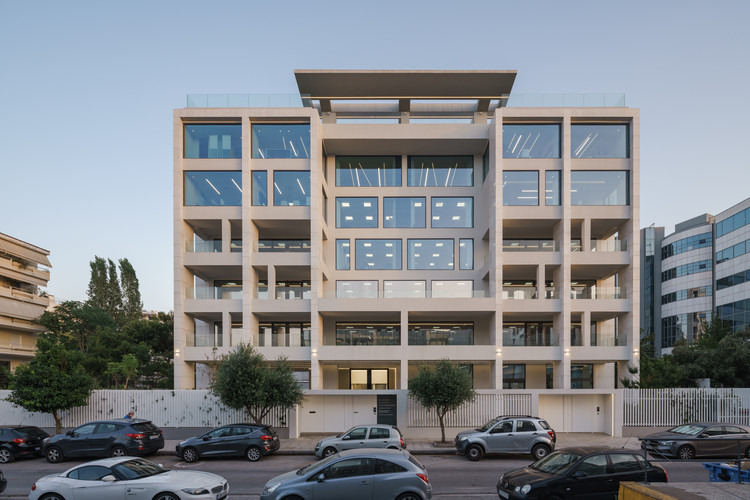 Text description provided by the architects. The existing five-storey building dates back to 1996 and it is characterized by its symmetrical shell and its monumental character. The total remodeling of the facade and the interior of the building aims to highlight the contemporary capabilities and to reinterpret the architecture of the past. The prior dense grid of the glass panes is replaced by impressive wide single glazing that reaches the maximum permissible height and length, leaving the view outwards unimpeded.

The notions of completeness and emptiness, of light and shade, coexist in a harmonious whole of geometries and volume. Furthermore, unexpected views between indoors and outdoors, along with the element of slim openings, summarize this rhythmic change and outline the view. Horizontal elements, like single balconies and canopy, unite the two sturdy parts of the existing shell.

The canopy at the ground floor welcomes the visitor to the building, while the canopy on the roof forms the coronation. In this way, the sense of consistency and succession of the distinct members of the building is completed. An open-air atrium is situated at the heart of the building, in response to the search for a “natural oasis” in the contemporary workplace. The built parapets on the roof are replaced with glass material, offering views to the Faliro Bay, within a natural environment of landscaping that covers the roof.

The interior partitions of the offices were made with plasterboard, while glass interior partitions organize the space, without compromising the open plan. The alteration of the ceiling, from gypsum board to mineral fiber ceiling, defines the interior space in sections while maintaining its unity, creating an interesting perspective on the elongated space.The installation of raised floor enables the transformation in seat arrangements, as a modern workplace demands adaptation to future issues.The facade is made of curtain walls, that reaches the maximum permissible height and length, leaving the view outwards unimpeded.

The need for natural ventilation is met through tall tilting glass panels which are situated on the side of the building.Elements of integration with the existing columns, which are coated with marble, are made with External Thermal Insulation Composite Systems.Indoor and outdoor lighting is unified with led strips in a gestural formation that highlights key points of interest. 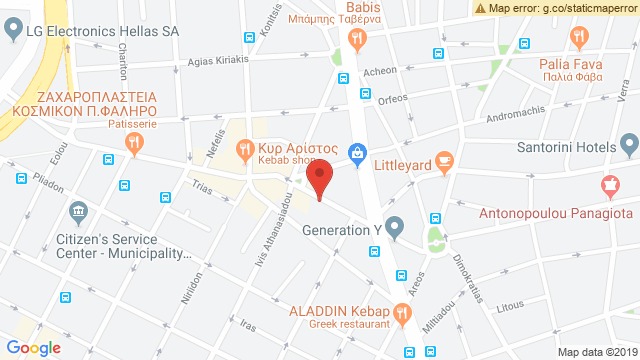 Location to be used only as a reference. It could indicate city/country but not exact address.
Share
Or
Copy
About this office
Tsolakis Architects
Office
•••