Studio Gang and SCAPE have broken ground on the new Arkansas Arts Center (AAC) in Little Rock. The current facility will be transformed, and the project includes a landscape design that will connect the AAC with the surrounding MacArthur Park. The project was made to embrace the Arkansas Arts Center’s history and create a contemporary space for the future.

The core concept of the reimagined Arkansas Arts Center is a folded, thin-plate structure running through the existing museum complex. The plate structure aims to give the AAC a new architectural identity and connect its diverse programs. In tandem to the new construction, the design makes visible the original 1937 facade as part of a new, open axis of pedestrian circulation through the building from MacArthur Park to Crescent Drive. Renovations to existing spaces will be made to improve usable program areas for exhibition, education, and performance and create sustainable areas for the public to explore and enjoy the programs of the AAC.

Jeanne Gang spoke at the Groundbreaking Ceremony, saying that “The design for the reimagined Arkansas Arts Center features new and renovated spaces for gathering and community events to create dynamic connections among the state-of-the-art galleries and exhibitions, renovated Museum School, and upgraded Children’s Theatre. One of our main goals for the project is to allow the architecture to invite interaction, discovery, creativity, and learning.” Kate Orff explained SCAPE's approach, saying that through native plantings, a tree canopy, walking paths, and a lawn for events, the landscape design will provide usable and accessible space for visitors.

Campaign Co-Chair Warren Stephens said that, "As we gather to commemorate the beginning of construction, today marks a major step forward toward ensuring that the Arkansas Arts Center is an important and flourishing cultural resource now and in the future. This is a truly historic day in the life of our city, state, and region.” Arkansas Arts Center Executive Director, Dr. Victoria Ramirez also commented on the project, saying that, "We commit to ensuring that the Arkansas Arts Center will be a cultural beacon for the region, showcasing art that educates, inspires, provokes, and beautifies our lives. All people, from young to young at heart, will gather here as a community to celebrate, learn, and cross boundaries."

The Arts Center project is made possible through Reimagining the Arkansas Arts Center: Campaign for Our Cultural Future, a $128 million fundraising campaign, which will fund the new Arts Center and provide support for transition, opening, and endowment. Campaign Co-Chair Harriet Stephens said that “The project is grand in scope and impact and will need the participation of many to reach an ambitious goal. As we anticipate the Grand Opening in 2022, we look forward to involving many more people in the campaign.”

During construction, the Arkansas Arts Center has moved from its current facility in MacArthur Park into a temporary location at the Riverdale Shopping Center at 2510 Cantrell Road in Little Rock. Classes, education programs, and performances will continue at the temporary location from Fall 2019 through the new Arts Center’s planned Grand Opening in 2022. 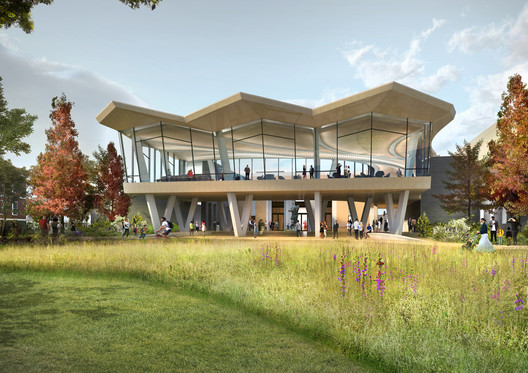