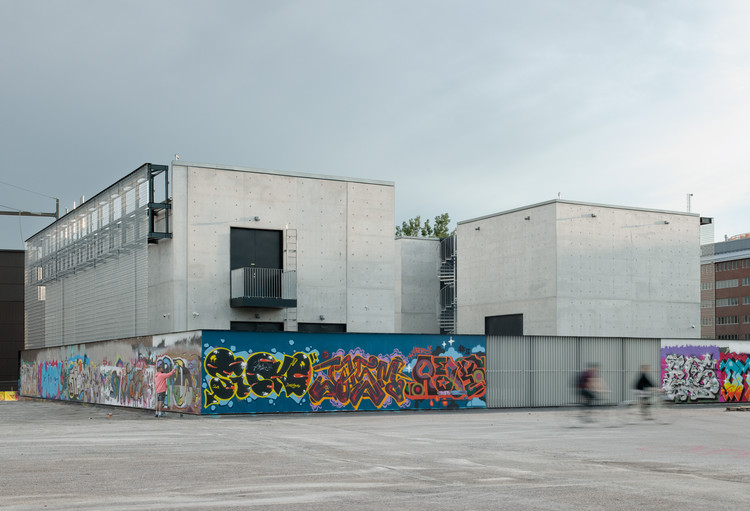 Text description provided by the architects. The Kalasatama Electricity Substation serves the rapidly developing Kalasatama area situated close to downtown Helsinki. It consists of two buildings housing transformers and a switchgear building, all in in-situ white concrete and clad over by an aluminum graffiti fence and an architectural steel mesh. The location is a central, urban site between the former Suvilahti power station that has been transformed into a cultural center and the still-functional Hanasaari power station. The site is located by one of the main traffic arteries leading to the city center.

Street art is a major, popular phenomenon in the area and it presented us with an opportunity for the building to provide a public function, which is not typical of an electricity substation. Because of this, a graffiti fence was incorporated into the project. The original assignment given to us by the client was to propose a location for the project site to the city master planning office and to find an architectural solution that would make the project acceptable in that proposed location. The context set high standards for the quality of architecture.

The building program has been laid out so that the whole relates to the scale and positioning of the existing, protected buildings. The building heights were restricted to a minimum and correspond to the scale of the context as well. The materials and structures are a reference to the existing, impressive concrete and steel structures on the site. Due to our client’s security concerns, the concrete boxes are set back from the site limits. However, we did not want to create an ordinary industrial project in which the buildings are tucked behind a perimeter fence, because the site is in such a central location in the city. Instead, a 1400 mm deep metal double facade was designed to meet the client’s requirements and also to bring the building facades to the site limits in an urban fashion.

The woven stainless steel mesh type was chosen because of the depth and materiality of the material compared to more ephemeral types of meshes. The mesh reacts to ambient light in different ways and the outlook of the building changes due to the position of the sun, viewing distance and the effects of the weather. The shadows cast by the metal structures create changing patterns on the concrete surfaces. The slightly abstract, low contrast visual effect is given by the stainless steel mesh above the fence functions as a neutral blank background for the graffiti.

The graffiti fence is about three meters high and consists of interlocking aluminum hollow-core profiles that were designed by us and custom-built for the project. The aluminum parts were anodized to provide a durable base finish. The graffiti fence has turned out to be popular with street artists. New pieces are created over existing ones constantly and the art is communicated to a wider audience through social media channels. Through this non-stop activity of erasing and creating the building looks different every day. 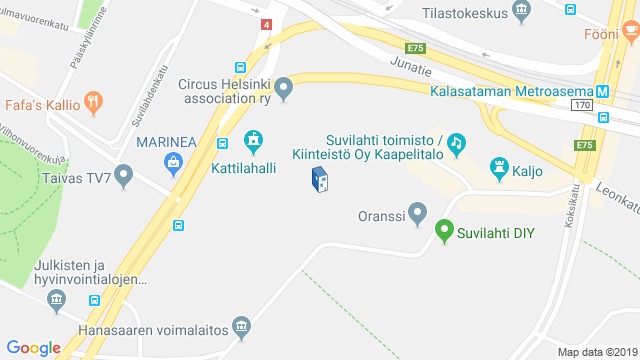 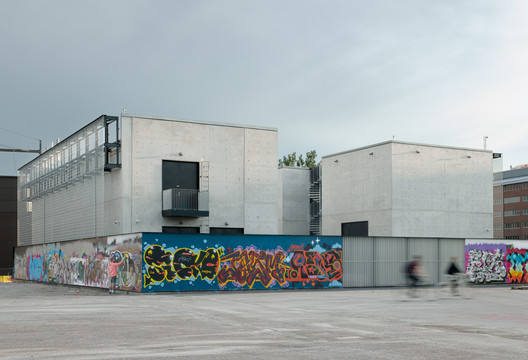