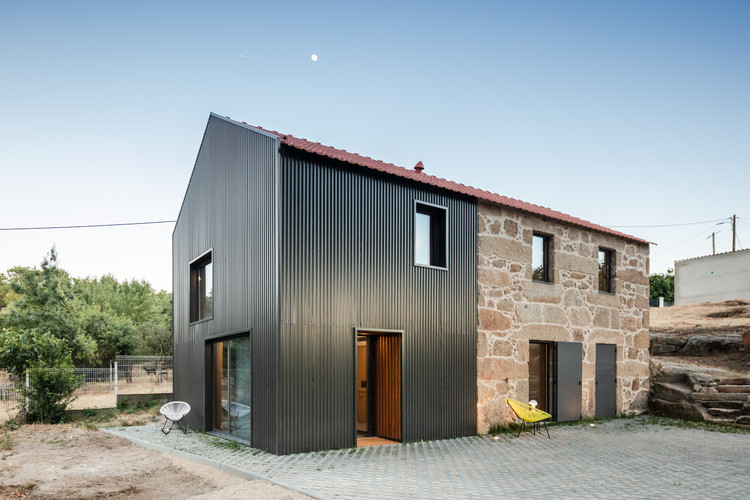 Text description provided by the architects. Located on the bank of the historical National 18 and with a view over the Serra da Estrela, the old house began by occupying the rocks that rose near the stream that flows through it.

Built at the beginning of the 20th century, the shape allows us to guess a two-storey house of humble character, which simultaneously served the agricultural and residential activity of the family.

The agricultural land is extended to the north along the National Road, the house was established to the south, where the rock did not allow any kind of cultivation. Around the 1950s, an annex was added, which was located to the north of the existing house.

After years of abandonment and the result of a family legacy, the project started from the need to rehabilitate the building, adapting it to today's modern comfort. The challenge was to control the demanding budget with a simple and flexible program. The house can be a vacation house, a permanent house, or in the future, a guest house.

The project consists of 3 bedrooms, a living room, kitchen and storage room, and this did not allow the preservation of the buildings original functions.

On the other hand, the local regulations limited the use of the land.

The pre-existing building was maintained and the idea of the annex proved to be a starting point for the concept of the project. The annex thus serves its own function: in the absence of space, an adjacent space is built.

The rooms are divided over the two floors of the granite building, one of them, a storage room that can be converted into a sleeping space in the future. The common spaces, the kitchen and living room, are in the annex. Regarding the form, the granite and roof prism were extruded. In materiality, the new and old were distinguished, sheltered under the same roof: the stone and the corrugated sheet, side-by-side and in continuity.

Inside, the neutrality given by the simplicity of the materials and the illusion of the absence of detail was sought. The idea of interiority is conveyed in the use of the openings, strategically located towards the landscape and by the punctual use of wood.