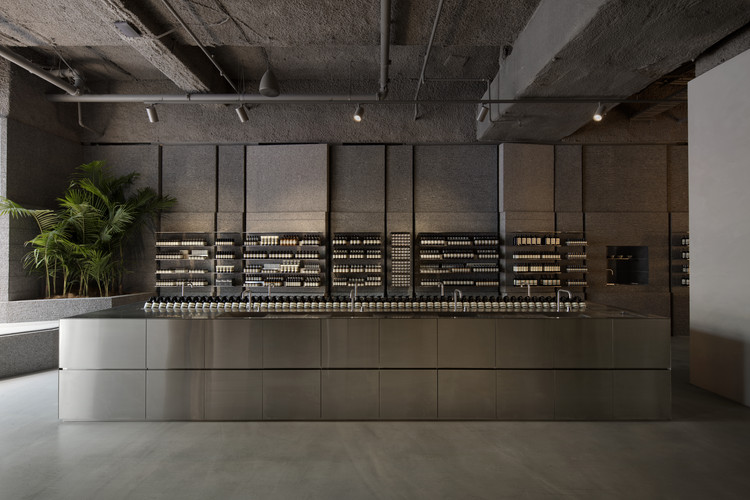 Text description provided by the architects. Aesop Pitt Street is a result of the spirit of Sydney infused in the ambiance and mission of Aesop, which includes creating honest products to be sold in shops which reflect the context of their locations, communities, and environments. The interior space of Aesop Pitt Street is tranquil and peaceful, leaving visitors with a feeling of serenity and reassurance. The design process began with understanding the relationships between the spirit of the coast and waterfront at Bondi Beach, and the vibrancy of the central business district. A monumental granite structure wraps the interior of the sandstone building, paying homage to Christo and Jeanne-Claude's 1968-9 Wrapped Coast, which rendered the sandstone cliffs of Little Bay a theatrical, lunar landscape. Aesop Sydney brings the greatness and tranquility of coastal cliffs to the bustling downtown environment.

Responding to the energy of the downtown area, the store’s entrance, clad in textured granite, is set back from the street and provides a moment to decompress and transition into the space, metaphorically bringing the coastal calm into the busy city center. The contrasting color and texture of the entrance, in contrast to the smooth sandstone features of the building, signals visitors to slow down and create a moment of stillness upon entry, allowing space to think and relax. A robust and durable material palette of stone, brass metal, and concrete balances a sense of monumentality and intimacy. Inspired by the monolithic scale and texture of a stone quarry, the room appears to be composed of solid granite. Despite sandstone being the prevailing local geology, granite, an igneous rock known for its strength and durability, lines the pavements of Sydney’s central business district, where Aesop Sydney is located, which resembles a strong connection between Sydney and Aesop.

Carved grooves in the stone create the divisions where metal shelves have been inserted, integrating shaves into the cladding. Polished metal detailing reflects the stone, creating an almost invisible line and highlighting the products displayed around the perimeter of the space. The large metal block sinks boast a clean profile and display the products in a central zone dedicated to cleansing and testing. The sinks and counters are industrial and sleek, even while their finish reflects the dark and cool stone.

The Aesop Pitt Street store consists of several areas that cater to the needs of each individual customer. The communal sinks at the front allow for staff demonstrations and user-friendly testing of the products, whereas the private sinks deeper within the space allow for more contemplative product exploration, creating a sense of “home” away from home, and encouraging mindful selections. Towards the back of the store, a small amphitheater allows for a moment of repose and relaxation where visitors can choose to observe the environment or watch a short film displayed on an in-built screen on the wall. 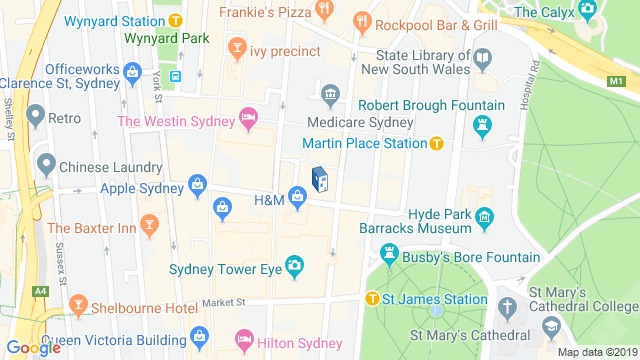 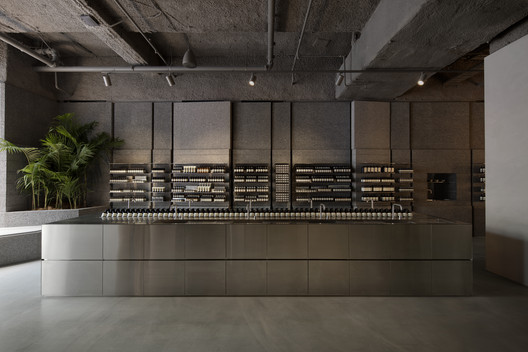