On the 13th of September 2019, the six winning projects of the 2019 Aga Khan Award for Architecture (AKAA) were honored at a ceremony held at the Kazan’s Musa Jalil State Academic Opera and Ballet Theatre. After the ceremony, ArchDaily managed to get exclusive comments from all the awarded teams and from the director of the Aga Khan Award for Architecture Farrokh Derakhshani. Read on to discover what they had to say about this cycle of prizes.

Comments from Farrokh Derakhshani, Director of the AKAA

Regarding the diversity of the projects, why was it crucial for this cycle of the Aga Khan Award to pick winning projects from very different contexts and different programs? This cycle of the Awards is not different from any of the previous cycles as it comes to the notion of diversity. In fact, when the Award was created the Master Jury of the first cycle in 1980 was asked to give five Awards but that independent Master Jury chose 15 projects and they argued that at that moment in history it would be difficult to cover all Muslim societies all over the world and the large point of view of the Award addressing all aspects of architecture with only five Awards. His Highness and the Steering Committee immediately accepted the jury’s suggestion and 15 projects received the 1980 Awards.

Regarding the award’s recipients, this award program doesn’t only and specifically honor architectural firm. Why do you think it was important to diversify in the type of the receivers of the award? The achievements of no project are the result of the work on an architect or architectural firm. Architecture is not a piece of art that has an artist « creating » a masterpiece. This is a narrow approach to reality. First, you need a good client as without a client with a vision no architect can do his/her best. Secondly, depending on the nature and scale of the project many people from various disciplines have a role, structural engineers, craftsmen, contractors, planners, landscape architects, social scientists, etc. Therefore, depending on their role, they get recognition.

Comments from the winning teams

Why do you think your project won the Aga Khan Award for Architecture?

Revitalisation of Muharraq, Bahrain: I think it was awarded by the jury because it presents a sensible, precise and community-based approach to urban regeneration one that balances contemporary architecture with the conservation of traditional buildings, acknowledging both the city's heritage and its current needs.

Arcadia Education Project, South Kanarchor, Bangladesh: In the citation of the master jury, the reasons for selecting this project as one of the winners is explained very well. I think the message this project carries have both local and global implications. I have approached the problem in a very simple way and to be the response to the particular condition of the site and the design strategy adopted have surely contributed to the selection as one of the winners.

Palestinian Museum, Birzeit, Palestine: I think that the project won because of its “grounded-ness”, it’s design drawing from its consideration of the landscape of Palestine and its particular site.

Public Spaces Development Programme, Republic of Tatarstan, Russian Federation: The whole Program was incepted by the Client, Mr. President Minnikhanov with a clear vision to improve quality of life for every citizen of Tatarstan. That was a really clear and simple idea, it was neither designed to gain political capital nor to take advantage of a serious amount of funding. That clarity made it easy for our team to develop the key qualities we have been praised for: public engagement at all stages ending up in unique participatory design manuals. Today this experience is used all across Russia; the equally high quality of design across 45 municipalities in more than 330 spaces, be it a village for 1700 inhabitants of the capital of Tatarstan, Kazan; a brilliant young team of architects who independently managed their projects.

Alioune Diop University Teaching and Research Unit, Bambey, Senegal: If there is a word that defines the Aga Khan Architecture awards, it is Commitment, commitment to giving the best solution to a problem. Commitment is also a fundamental key in the philosophy of IDOM and is the attitude that guided us throughout the design process: to make a building that was timeless, elegant and representative, that solved not only the program but also other problems that the campus had, that was built with local techniques and materials, and sustainable, that consumed the least possible energy and had a low maintenance cost.

Wasit Wetland Centre, Sharjah, United Arab Emirates: I think the main reason behind this project winning the AKAA is its contribution to its urban environment in various ways, mainly reclaiming of close to 20 acres of former wasteland and valorizing it as a form of natural capital. What had become a waste dumping ground has had its indigenous ecosystem restored and is proving a popular place for visitors to appreciate and learn about their natural environment. As a result the site is now home for over 350 species of local and migratory birds. While developing the project, we envisioned it as a low-impact and environmentally conscious development, the design of the visitor center blends with site topography minimizing its visual impact on the surrounding and creating natural environments for birds. The key drivers of the center are to educate people about their ecosystem, and at the same time rehabilitating and breeding endangered resident and migratory birds.

And what does it mean to be one of the recipients of the very prestigious Aga Khan Award for Architecture?

Revitalisation of Muharraq, Bahrain: It's a great honor to receive a prize that has over the years greatly contributing to constantly redefine and reassess the priorities and definition we give to architecture and acknowledges the complexity of actors and contributors behind the projects.

Arcadia Education Project, South Kanarchor, Bangladesh: It is no doubt a wonderful feeling to be one of the winners of this prestigious award and I consider this as a validation of the ideas that I try to realize through our works. It will provide inspiration for our future works.

Palestinian Museum, Birzeit, Palestine: The Aga Khan Award for Architecture is an award that considers how architecture can meaningfully make a difference. To evaluate the projects, the assessment process is extremely rigorous and emerging as a recipient is truly an honor.

Public Spaces Development Programme, Republic of Tatarstan, Russian Federation: I think that it is a great honor but also most importantly it is a clear indication that the approach we have formulated is the right way to go! Also helps to realize that working in the furthest away small Tatar village you can influence the world. Unbelievable new knowledge.

Alioune Diop University Teaching and Research Unit, Bambey, Senegal: For years we knew the Aga Khan awards and their philosophy of social commitment that we deeply admire. That is why it is an extraordinary honor and pride, a dream to receive this award, but not only for us, but also for all our colleagues, the client, the Government, and the people who worked on the work. We are tremendously grateful.

Wasit Wetland Centre, Sharjah, United Arab Emirates: We are honored to receive the Aga Khan Award for Architecture 2019. It is a remarkable milestone for us. From one point we look at it as an achievement, from the other, it is a life-span commitment to abide by the vision that helped us win and was always part of the beliefs of X-Architects. 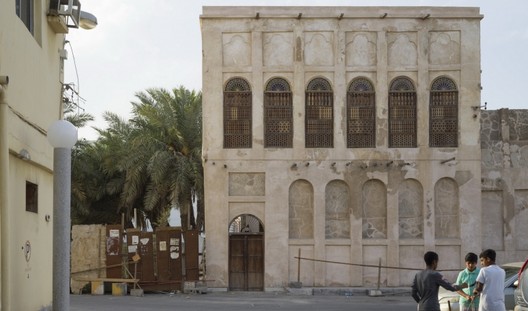