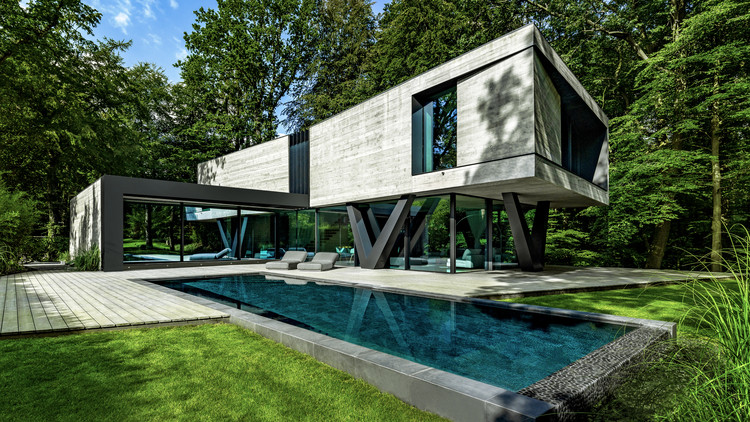 Like a sculpture carved out of stone, the vision of a modern villa has come to reality. It abstracts and reinterprets classical rules: for an incomparable sense of living in the midst of nature.
– Querkopfarchitekten

This villa breaks with all traditions and forms an unrestrained contrast to the otherwise natural surroundings. Like an artistic installation on a podium made of natural stone, which at the same time forms the underground car park, lies the two-story villa and clearly focuses on the forest as the main point of reference. The shape of the building is based on the idea of an L, which borders the hillside of the plot while providing a sheltered outdoor-space for the terrace.

A small gap forms the entrance. From the street, three exposed shapes of concrete blend strikingly and puristically, leaving no room for a glimpse inside. The ground floor is completely closed to the street, it dissolves to the forest by large glass elements, which flood the space with light, and produces an intense connection to the environment and nature. The upper floor forms a creative contrast to the ground floor.

Above the transparent construction of glass and steel hovers an imposing, twisted concrete body, which ensures a high degree of privacy and protection. A few floor-to-ceiling window elements in the sleeping areas present targeted views into the forest. Large slats of steel are wrapped around the airspace in the middle of the house and create a connection of the levels. This is our vision of a sculptural, purist and modern villa that abstracts classical rules for an incomparable sense of living in the midst of nature.