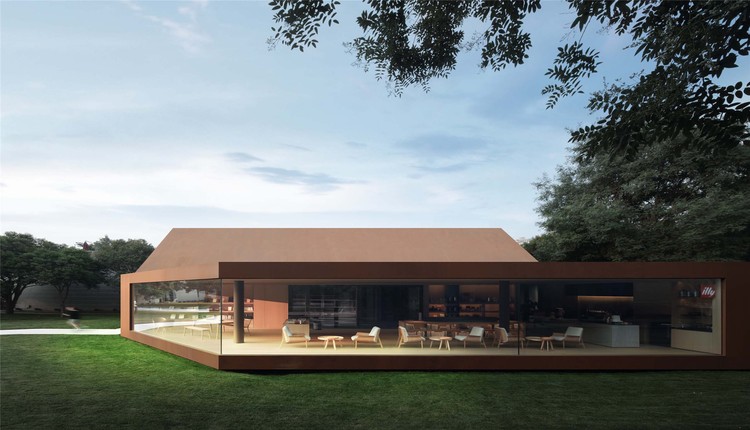 Text description provided by the architects. The first reaction for people to the word design in architecture and space is: what the building looks like, who designed this building. People usually would pay attention to the appearance of a building such as the door, the window and on the so-called “style” such as the color and the symbol. However, these habits are not important and those features are just a dramatic “shell”. The value of design should lie in a space which is full of all these features and the space is the core of design. When people in or out of the space, their state, emotions, behavior, feelings and perceptions are the core.

Design and art are all derived from life but are above life. Nevertheless the reality is that design and art are usually “above” life and divorced from life. In the era of Internet, a large number of “Internet sensations” buildings and space go viral; however, most of them like fireworks are extremely short-lived and turned out to be a flash in the pan. Art can be a painting or a sculpture; it doesn't matter that you cannot understand it because its soul is just for a specific group. Design is totally different from art because its soul is not only from the designer's wishful thinking but also needs the injection and contribution of users.

Against the backdrop of the rapid development of China, people now have undergone drastic changes in a fast-paced period. The word “Generation gap” did not exist before and the gap used to refer to an age of difference of one or even two decades but now it has been narrowed down to three or five years, and different generations certainly have different hobbies and experience. In this fast-paced era, the design of some architecture and space is usually overdone and causes the overuse of building resources in order to establish a benchmark of large customer flow. Every industry strives to achieve a high-point and set up a community economy at a high price. In the rapid development of each business systems, city life is subdivided into different groups so that the commonality among people has become less, and then superposition of diversified culture creates different cultural barriers. In the face of life with multiple choices, a generation may live in a different world.

Knowledge and information now can be quickly obtained on the Internet. Daily necessities and other product resources almost enjoy first-class design and quality, and comprehensive services also make our life more convenient, so it seems that people do not need discussion at all. It has become a common phenomenon that, in the current urban life, face-to-face communication between people has become less and the distance between people is getting farther. In contrast, the development of design for buildings and space is relatively slow when the demands of material and the spirit are in a comfortable area. Especially, public space such as public buildings, functional facilities and the community cannot strike a balance between the requirement of times and a meticulous design. If aesthetics could be initially removed from design and the design of building and space then might be placed in a wider social pattern, so design in accordance with real situation would help people solve some problems and change some stereotypes and make up for the necessary social defects. This is right thought for the design of urban buildings and living space. Aesthetics should be the minimum requirement for design and be the last thing to be considered in design.

No matter how far our society develops, the link between people shall not perish and the necessary development of urban public buildings and space can have more possibilities and imagination from the perspective of a city. For example, the basic functions of daily functional space such as public transportation hub, urban park, open squares, public toilets, community space, footpath and flyovers is and will be continued to be improved. Accordingly, a city's friendliness, inclusiveness, care as well as the attitude and mind of its development can be presented naturally.

In 2018, my agency was commissioned to revamp a public toilet which is 120 meters away from Grand Tang Dynasty Ever-bright City in Qujiang District, Xi'an City. Xi'an is one of the World Four Ancient Capitals as well as the starting point of Ancient Silk Road. Visitors from home and abroad to the city are 13 million person-times annually. The public toilet is surrounded by architectures imitating traditional ancient architectural form; it borders a CBD and a pedestrian street square to the east, the residential community to the north and is next to Tang City Wall Relic. When I first conducted the on-site investigation, I found that the original design of the toilet was to reflect the elements of ancient Chinese architecture and to achieve harmony with its surroundings. However, it was difficult to coordinate the proportion and the visual effect was not harmony because the building was higher than the Wall. The revamp was not allowed to dismantle the existing foundation and disharmony also could not be easily solved by partial demolition. In addition, we should follow the design rule of simplicity to reduce the difficulty of revamp within a short period, and a sidewalk should be maintained intact. Accordingly, we mapped out an unconventional design solution to meet the requirements.

The physical structure of the antique building part of the toilet was initially removed so that its basic functional prototypes could be restored. A building with a universal meaning should be a “non-reference” building under the premise of satisfying the demands of times and removing the ideological barrier. It is not recommended to apply modern construction techniques to imitate an ancient building and inheritance is not an imitation of the shape but is to know the ancients’ thinking about the environment and society. We made use of the one-sided exterior space of the original building for extension and divide the whole building into three parts, namely the public restroom, a reading room and a coffee room, and these three parts are connected by an open corridor. The spatial overlay is set to the lowest level in order to reduce the discordant and abrupt impression of the building under the Wall Relic. Due to the original highest point rapidly descending to the lowest point, a visual illusion helps weaken the height feature.

The walkway runs through the whole building so that people can enter any area at their will. The walkway equipped with pet water area, shelter and rest area provides a space for community gathering. And the walkway separates the public restroom from the reading and communication areas so that their different functions are complementary but do not interfere with each other. When public toilets meet coffee shops, this kind of strange combination is actually integrated rigid demand into a waiting space, so a single and monotonous functional space can be transformed into a space for urban communication. Pedestrians can have a rest here and nearby residents can come here to have chat, care pets. This place gives an opportunity for people gathering and people in this magnetic field can exchange with each other, know each other and their relationships can become closer. It also eliminates the stereotyped image of a public toilet and provides urban life with an exchange platform.

Climbing one stair is needed when people come to the coffee shop because its space is 15cm higher than the corridor space. Door handles are installed in different heights so that can suit the demands of people with different heights, in addition, one surface of the cylindrical handles is cut to a plane, so it can avoid cup getting off hands while people holding a drink.

Illy cafe has been open for business after the interior revamp finished. The design of the interior space uses oblique side of the building, and the wall between the reading and communication space is embedded with a long glass. Combining with well-arranged green plants outside the window, the glass like a long scroll has become the screen of the ancient city. The different angles of inside and outside space can present a dramatic feeling and subconsciously boost vision contacts and present a silent interaction. The interior decoration follows the rule of simplicity, common and harmony and people and their experience has been placed on the top list. Decorationism should be avoided so that the room could leave more space for people; in addition, furniture is placed naturally to suit the habits of people. The interior space forms different kinds of interactive images and gives people a feeling of freedom and a sense of calm.

Set in the other end of the corridor, the left restroom is for gentlemen and the right one is for ladies. An independent (third) restroom, equipped with safety rails, children's toilets and alarm devices, is especially for the disabled and people with babies. The restroom is a public utility, therefore all the materials selected should be safe and easy to clean. There is a light above each toilet compartment to show whether the compartment is occupied or not. In addition, there is no hand dryer because all the basin taps have the function of hand drying, allows people to have dry hands when they walk away. Pet poles are available in the restroom, and the makeup light and a full-body-length mirror are available in the ladies. Different geometric patterns of mirrors are placed at different angles to make the space flexible and avoid large area reflection caused by one large mirror. These mirrors therefore can provide people with peace and calm when they use them.

Life between buildings by Jan Gale believes that from a long-term perspective, outdoor life is more realistic and more fascinating than any strange combination of architectural forms. I began the filming work after the restroom come into use for six months. During the filming period, I as a designer was very gratifying because the original design was verified by reality. When people are in or out of the building, their feelings and behavior may trigger more kindness and friendliness. In this space, people can call for a passer-by to take a photo, pet cats or dogs, and can hear cheerful voices between the elders, see young people live in harmony and children running on the lawn, so different groups of people coexist with and care for each other in this place. And those people who are coming here are the missing part of the current fast-paced life. It reminds me of my childhood that neighbors could find an “open space” between buildings to chat. The space in Beijing is called Hutong (alley) and in Shanghai called Nongtang (lane). City people still need an “open space” to sit and chat.

The social characteristics of a city space are constantly being changed. The key to the authenticity of a city not only lies in the physical structure of the building but also in the urban social characteristics. In the meanwhile, the concept of authenticity involves the personal experience and the sensory experience of the city, so it is not only a visual image, but also a series of social activities reflected by established results. Only when a design and creation is from history and based on current situation, can it be understood and recognized. Only when a design gets rid of hustle and bustle life and is full of reasonability, caring and patient observation, can it save us from heartbreak. 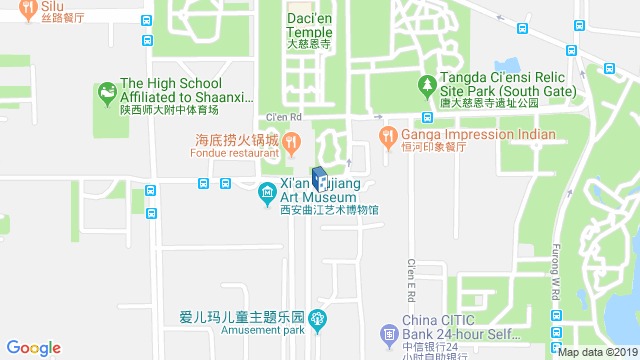 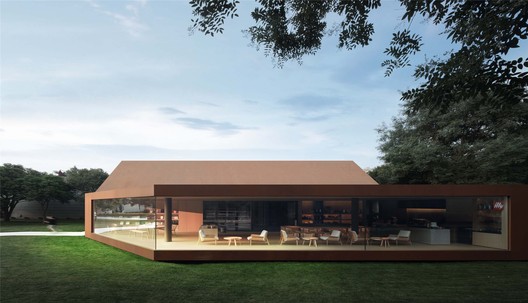