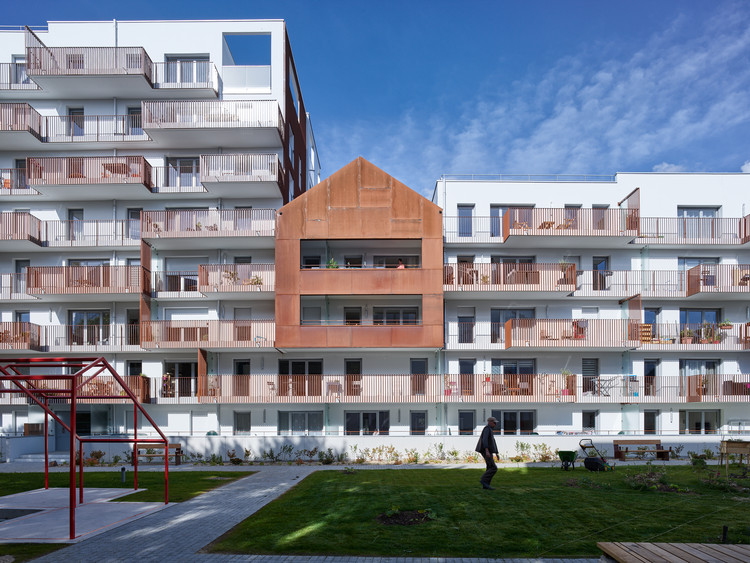 Text description provided by the architects. Beauregard (beautiful outlook) takes its name from the vantage point on which it is located and which offers distant views between the valleys of the Ille and Vilaine rivers. To fully appreciate this, one need only climb to the top of the residential building located at the Southern tip of the triangle of the new Cours des Arts designed by the architect from Rennes, a/LTA. At such heights conducive to travel, the great landscape can be taken in from the back of this urban cockpit.

To build this diverse ensemble of housing units which combines a social aspect and home buying possibilities, the project management team NEOTOA bravely rose to the challenge of creating an “intergenerational housing complex”. In 2013, the architects Maxime Le Trionnaire and Gwénaël Le Chapelain came to carry out this programme with a new kind of community living in mind.

Quite a challenge, organised around a central communal courtyard, which six years later would become artists' studios and gardens as well as 119 housing units, 8 of which have “shared” spaces, between 9 and 11 sq.m. each, which really make this project stand out. Are they guest rooms, game rooms, conservatories? They are a little bit of all these things and feature bow windows about a metre deep; essentially, everything you might need to feel right at home behind these suspended windscreens.

How to recreate village life or rather hamlet life, on a block carved out of the Concerted Development Area (ZAC) plans, and all the while, abiding by the plot's density and height regulations? And without closing it off too much so as to avoid the inhabitants having to say to the outside: “Here, we don't live like you do”. Following the line drawn by the hedgerow, the opening in the landscape consequently becomes the centre piece of the project; the three constructions make it possible to free up space in the heart of the block. What is left to be done is to work on this “constructed empty space”. This is where the main stakes of the life of this future project lie.

This “constructed empty space” separates as much as it unites the buildings. And it must seek to reconcile spatially, in its own way, the constant tension that exists within us all, caught up as we are in our daily lives, between spending time with our community or with ourselves. How to organise opposite buildings and proximity will be a key issue. Even if diversity cannot exist without protecting intimacy, without establishing everyone's autonomy, and the free choice to meet up and spend time together.

The random distribution of the houses and artists' studios creates spaces evidently conducive to interaction for they break with the panoptic effect which would have been given, without their presence, to this wide open space surrounded by mounds. Too much visibility of each space could make those less favoured spaces seem like they were “being exposed” or “exposing” themselves and, therefore, become an obstacle to social interaction.

The noteworthy use of weathering steel, seemingly unusual for Rennes, highlights the key elements of the project. It has been used on the balcony handrails and houses alike. The line drawn by this specific material echoes the general design of this porous and traversable block. Could this be a new kind of phalanstery? If we also take into account the leisure room which houses communal laundry facilities, this project rekindles, in its own way, a utopian discourse and opens up a potential reconciliation with such ideals. 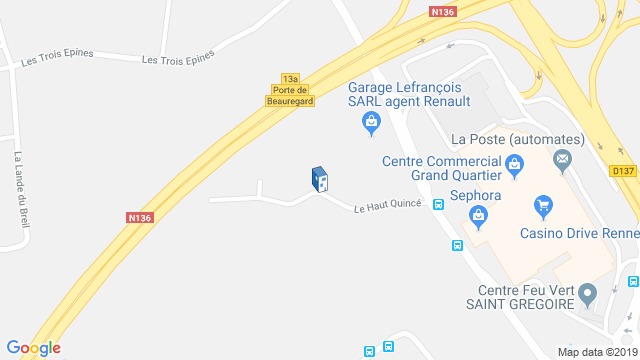 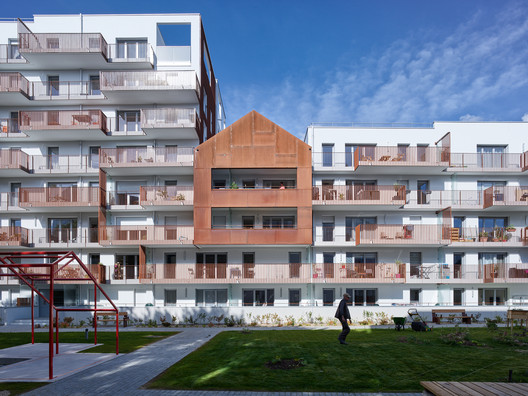