Save
Jacques Herzog in Conversation with Tatiana Bilbao
Share
Or
Copy

Jacques Herzog met with Tatiana Bilbao at the Herzog & de Meuron’s studio in Basel, Switzerland on May 2019, and got to discuss the Mexican architect’s projects and architectural approach. The two long-time friends and prizewinning architects talked about the defining moments in their friendship and the advice of Herzog that improved Bilbao’s method.

Herzog, the co-founder and senior partner in the Swiss architecture firm Herzog & de Meuron, founded in 1978, has been collecting with his studio several prizes including the prestigious Pritzker Prize in 2001 and the RIBA Royal Gold Medal and Praemium Imperiale. On the other hand, Tatiana Bilbao, a Mexican architect from a younger generation, founded in 2004 Tatiana Bilbao Estudio with projects in China, Europe, and Mexico. Her work is primarily focused on the landscape, on different levels and scales, ranging from “the Mexican countryside through urban scenes to the internal landscape of the individual building.”

In their conversation, Bilbao discussed her general position on collaborations explaining that “it enriches the project because when there is more complexity and definitions in one site… then it really provides a more broadened possibility for the people that are going to use the architecture.” Moreover, they also reflected on Bilbao’s position against eclectic digital architecture that does not tackle, in her opinion, the architectural issues or fulfill the basic necessities, especially in her country of origin. In the end, Herzog and Bilbao agreed that “it’s all about the architecture we can do, and not about us being the architect”, explaining that architecture should be inspired solely by the requirements of the people. 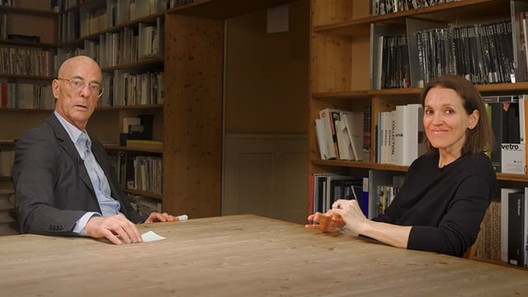