The world's largest urban farm is set to open next year in Paris. The six-story, 150,000-square-foot garden aims to grow more than 2,000 pounds of fruits and vegetables a day. Twenty gardeners will tend to 30 different kinds of plants to produce vegetables for the community. Called Agripolis, the project uses aeroponic farming so the plants absorb water and nutrients via mist.

Agripolis will run without the use of pesticides or soil. It is part of the larger Parisculteurs project, which has committed to planting 250 acres of vegetation across the capital. "Our fresh produce will be used to feed the inhabitants across the southwest of the city—either directly, through veg box schemes, or via shops, hotels, and canteens—thereby helping reduce food miles," says Pascal Hardy, founder of urban-farming company Agripolis. Accompanying the urban farm will be a new rooftop restaurant run by area group Le Perchoir.

With support from the city of Paris, Agripolis hopes to reconnect citizens with their food sources to foster environmental and economic resilience. Doubling as a community space, local residents will be able to secure plots of land for gardening. “Our vision is a city in which flat roofs and abandoned surfaces are covered with these new growing systems,” says Hardy.

The massive new rooftop farm is set for a ribbon-cutting ceremony in the spring of 2020. 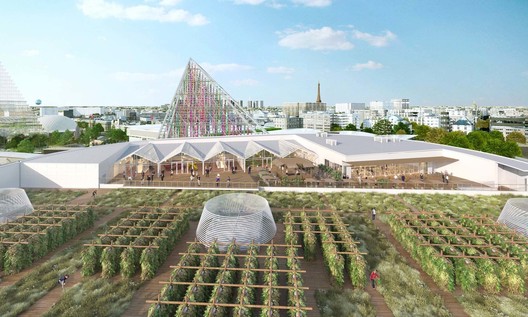