But Gropius didn’t expect more women than men to join. In fact, concerned about the school’s image, he capped female admissions to a maximum of one-third of the total just a year after opening.

“Many of the Bauhaus women weren’t self-promoting,” says Dr. Elizabeth Otto, associate professor of art history and visual studies at the University at Buffalo College of Arts and Sciences. It’s one of the many reasons that few women Bauhauslers have been widely recognized. “The [male-driven] history of the Bauhaus as we know it, is not right,” Otto adds. “If you integrate the women, it is simply a more complete and a much more interesting picture.”

Otto’s recently-published book, Bauhaus Women: A Global Perspective, which she authored with University of Erfurt professor Patrick Rössler, spotlights 45 Bauhaus women and their courage and creativity, as well as their progressive ideas and inspiring stories.

A case in point: Adelgunde (Gunta) Stölzl, the first and only woman to become a Bauhaus Young Master.

The 22-year-old Stölzl left Munich’s School of Applied Arts to join the Bauhaus in 1919. Attracted by the “Bauhaus Manifesto,” a four-page booklet explaining the vision of the school, she was hoping to study glass and wall painting.

However, initially Gropius only admitted women to the weaving workshop. His argument was that females weren’t suitable for heavy manual work and were unable to see three-dimensionally. Women who dreamed of becoming painters or wood sculptors found themselves on the loom, just like Stölzl.

Together, these scorned artists developed weaving into a Modern art form and the weaving workshop became the most financially successful department in the Bauhaus’s history. In a 2019 German television documentary, Stölzl’s daughter Monika Stadler said, “They had the feeling they were inventing weaving. Old [weaving] traditions and patterns didn’t interest them.”

In 1927, the weavers pushed for Stölzl to be named a master. They succeeded and, at age 30, Stölzl became the first and only female Young Master, a title awarded to outstanding Bauhaus graduates who continued to teach at the school. “It was a revolution from the weavers,” Stadler says. “[The weavers] demanded from the Master Council that my mother should manage the weaving class.”

However, Stölzl remained legally and financially worse-off than her male counterparts in the Master Council. “She had to threaten to quit to get a salary increase,” Otto explains. Subjected to both internal and external politics, Stölzl left the Bauhaus in 1931. She relocated to Switzerland, where she ran a hand-weaving studio.

Only in 1976, seven years before she passed away at age 86, Stölzl received the recognition she deserved with a solo exhibition at the Bauhaus-Archiv in Berlin.

“That Bauhaus education methods have taken over the world is a good thing for art and design,” Otto tells Metropolis. “In terms of gender equality, though, I’m often struck that many of the struggles women had back then are still the same today.” 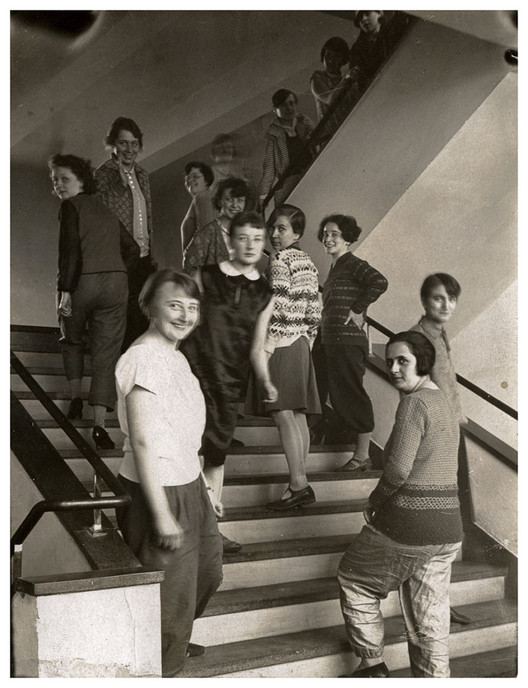