Save
Why Do We Travel?

Nicolas Valencia: Travel was June's Monthly Topic. Back then we published articles about architecture guides and travel-related typologies, but we didn't talk about the experience of traveling. What does travel mean to you?

Dima Stouhi: I was born and raised in Lebanon, but I'm moving to Switzerland next month. This will be the first time that I experience living abroad. Because Lebanon is so different from any other country, traveling is incredibly important for me to see how other people live and what other cultures are like.

Eric Baldwin: I often introduce myself by saying that I’m a farm kid from rural Iowa. My idea of the world, including different cultures and ways of working, was limited for much of my youth. In college, that worldview expanded greatly. I was able to study and travel around the world, in places like China, Italy, and Greece. I believe that context is everything; travel is one way to expand your context.

Christele Harrouk: I was born in Beirut too, coming from French roots, so It was always easier for me to travel, and it was always an option for me to live abroad. Nevertheless, I never opted for this choice: I did spend a couple of months here and there, but to me, the notion of home was more important. Traveling has opened my eyes to what this world holds, and it has also made me better appreciate what I had and took for granted.

Nicolas Valencia: But it's still a luxury nowadays.

Eric Baldwin: Travel has been priceless to me, but it’s also become terribly destructive to our environment. In many ways, it is a luxury. As Greta Thunberg showed when sailing across the Atlantic on a zero-emissions yacht, we have to come up with better ways to travel. Our current conditions are becoming more and more unsustainable.

Dima Stouhi: Traveling is definitely a luxury now. Especially for people who need visas to travel, like me.

If you travel, you are a loser

Nicolas Valencia: In June we published an article titled The Age of Travel is Over. The author says that "if you travel to earn your living, you are a loser. If you travel to see places, or to learn, you are an enemy of the planet."

Eric Baldwin: I think it was meant to be a sort of provocation. Travel is still so important, but that doesn't mean there aren't better ways to travel. Or that we shouldn't continue to imagine new modes of connection that bring us together and expand our context without harming the environment.

Christele Harrouk: Traveling is a pure form of learning, possibly the most genuine way of getting information, but I always go back to the idea that if you don't do anything with these experiences, they become useless and the whole process becomes futile in a way. The more I meet people, the more I discover that a lot of them, who pretend to roam the globe, are so closed into themselves.

Dima Stouhi: The idea of traveling is different now. People want to travel to show everyone that they traveled or just for the sake of traveling. There isn't much thought to what they harm along the way.

Nicolas Valencia: Dima has a point. Traveling has become a sort of meta-traveling: visit a place to say you visited a place. I'm very critical of those who don't learn anything from traveling, but then, I think, "Why should they experience it the same way I do?"

Dima Stouhi: That's the thing, it's a matter of perspective. I doubt that people "never learn" from traveling. Regardless of how different each individual is, at least one experience, building, or even meal is going to get stuck in their head. It's just a matter of what people are paying attention to while traveling.

Eric Baldwin: We travel to work, to discover, to connect with family or friends, to get the perfect Instagram post, to escape. As long as we continue to question why, and whether we are doing so responsibly, I think travel will continue to have meaning. Beyond location, I think being a "good" vs. a "bad" tourist is part responsibility and part perspective. If you travel to escape your daily life and enjoy a beach in Brazil, but you don’t care to learn about the city, people, or culture you visit, is that inherently bad? Again, it’s a matter of context.

Nicolas Valencia: Bloomberg published a chart on Instagram a few days ago explaining that "tourist destinations are only going to get more crowded," especially in Europe. We recently saw Venice ban large cruises from its historical center. How do we think other cities are going to deal with tourism?

Dima Stouhi: I support Venice's decision. I went to Vatican City last year in August. I remember at one point I just wanted to leave because of how crowded it was. We couldn't even stop for one second to look around us. There was no place to stand in the Sistine Chapel. It's sad.

Eric Baldwin: It’s a tricky thing. It’s tied to preservation: when does saving something relegate it to becoming frozen, functionless scenery? Again, I go back to context. What does tourism give to a city, and what does it take away? Does heritage have a part to play? No city remains the same, and in turn, tourism and travel have to change too.

Dima Stouhi: But Eric, the way we see it, preservation comes first because we know and appreciate the value of historical sites. The majority of people don't.

Eric Baldwin: I question the value of historical sites. How do we measure relevance or heritage? Why are the pyramids worth preserving? It’s a question — and battle — of values and those things that define us. In turn, it’s directly related to why we travel.

Nicolas Valencia: Countries such as Spain rely strongly on tourism — the industry accounts for around 13% of its GDP. It's hard to regulate if your city's economy relies so strongly on tourism. Anyway, I'd assume that restricting access to tourists will eventually punish middle-class tourists.

Christele Harrouk: Well, I'm not sure about this. Maybe not restrict accesses but make them more organized.

Dima Stouhi: I don't believe that increasing prices and limiting access to rich tourists is the way to solve it. I think it's like what Christele said: it's how governments organize it that might make a difference.

Christele Harrouk: This is the responsibility of the cities: they have to advertise different areas. It's not difficult, but they just don't take the initiative. Changes in marketing strategies can indirectly reduce the concentration of tourists in one place and divide it into many regions, making new areas grow and develop as well.

Christele Harrouk: But if there is a Zaha Hadid building in the periphery, you will go there, and spend less time downtown.

Nicolas Valencia: We have been talking about Europe, but what about Latin America? Africa? Asia? Have you visited these regions?

Nicolas Valencia: In Latin America, we are more interested in visiting Europe and the US, rather than our own region. This is despite the fact that airfare has plummeted in this region, so it's cheaper than ever to travel across Latin America.

Christele Harrouk: This may be global, but don't you think this is where city branding comes in hand?

Nicolas Valencia: Sure, city branding defines what we think about them. But one thing that freaks me out about traveling is that after spending a week abroad, people think they gain a certain power to explain what a whole country is like. We each have different backgrounds of emotions, ideas, and expectations, so a gay man visiting a city after breaking up might have a totally different experience from a heterosexual woman who meets a guy in that same city. Each person's visions of the same city are completely unique, which means these narratives can't be universal..

Dima Stouhi: I think these assumptions are a normal human reaction. Whatever is different from what they usually see, they pin-point it as if it were a flaw..

Eric Baldwin: I think that's a very hard thing to change. You inherently have more perspective than someone who has never been there, but at the same time, you have an inherently limited understanding as well. I think the after-visit stereotypes will continue to happen, as Identity is always tied to travel and context. How that context is shaped happens in a myriad of ways, and defines who we are. 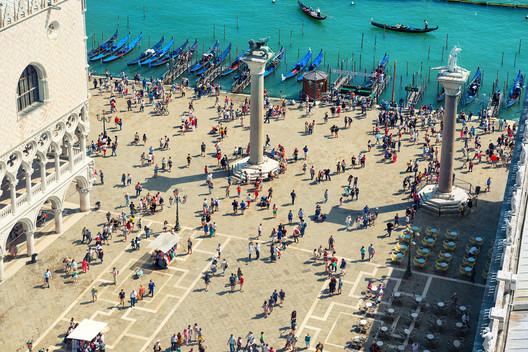