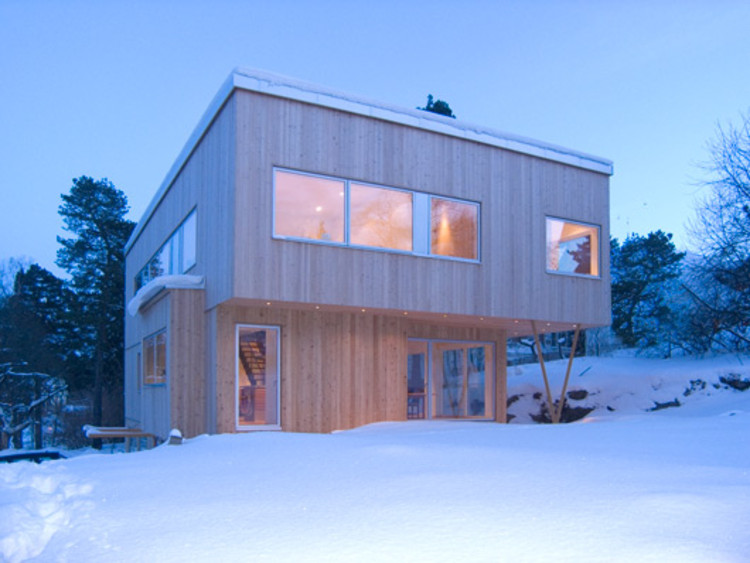 Text description provided by the architects. Villa Kapla is a three story, split-level house, based on the logic of Kapla planks. It’s an organic, yet rectangular, wooden building, sitting on one of the hillsides of the island of Lidingö in Stockholm. According to the logic of Kapla, we started out spatializing the programme by stacking wooden blocks - where the interior rooms because of their number, square footage or potential views demanded it, blocks would cantilever, resulting in a number of randomly protruding volumes. A combination of sustainable design, heavy insulation and clean-tech also make Villa Kapla a low energy house.

Villa Kapla replaces a small house at Lidingö in Stockholm to accommodate a large family, where the parents are also working from home. There were three given input parameters from the client for our design work: A clean, right-angled, contemporary expression, a larch cladding and a reuse of the basement structure of the original house. By means of the children’s Kapla planks we summarized the client's intentions.

Villa Kapla is continuous and coherent in terms of color and material. Except for its steel detailing, the building has one single exterior material: Solid wood, which also covers the floors on the two upper levels. The first level floors are all covered with a rough but shimmering, grey slate from Offerdalen, which is also found on all bathroom floors, as window-sills and as tops of the double-sided fireplace, that semi-separates the dining room and the living room.

The walls and ceilings have one single nuance of white, except for parts of the walls of the private niches of the third level, which, in contrast, have expressive colors chosen individually by each family member. There are two lighting principles throughout the house: One general and one specific. There are mobile, directable spotlights both in the indoor spaces and in their continued sections outdoor under cantilevered building volumes. In specific places electrical points in the ceiling allow for hanging or ceiling mounted more feature type of lamps.

As all of our work, Villa Kapla is done with green ulterior motives. The house has generous windows and glass doors connecting the interiors of the house visually to immediate intimate outdoor spaces as well as to the distant hilly landscape. During the summer the glazed openings are protected from excessive solar heating by the cantilevering building volumes. The lower sun angle of the wintertime lets the warming sun energy into the house, where it’s stored in the massive masonry of the fireplace.

Clean-tech, heavy insulation and natural materials give the client added value in the form of low heating costs and a healthy indoor climate. A vegetable garden right next to the kitchen allows for an eco-lifestyle, along with spaces designated for composting and separation at source of household waste.

The house is a three-story split-level building of totally 350 m2. The public zones of the two lower floors of the house are all given gradual transits to adjacent garden spaces. The third floor is the family's more private sphere of bedrooms, bathrooms, parents' workplace and a shared family room.

A large portion of parents’ time spent at home is generally related to meals. Luckily, cooking is the favorite pastime of both parents in Villa Kapla. Therefore the kitchen is located on an entresol in the very center of the house - on the middle floor and adjacent to the entrance-atrium and stairwell. Here the family has visual contact and control over the street and the entire public section of the home, including major parts of the garden. In the kitchen there is room for cooking as well as for mingle, homework and play.

For us at YAJ architects, a home is a place that is both relaxing and inspiring, that fills those who reside there with a pleasant feeling of elation. A home is also a place for both the everyday and the festive. And, necessarily, it’s a machine for living, that makes the living logistics of even a large family as smooth and enjoyable as is humanly possible. We sincerely refuse any opposition between function and aesthetics!

Rather than the traditional Western distinct separating of rooms and functions, we generally prefer continuous spaces provided with series of niches that can be screened off to various degrees - visually, acoustically and/or physically - depending on the specific needs for privacy or isolation. In our work, as in Villa Kapla, this idea often include gradual transits between indoor and outdoor spaces, as well as buildings growing in summertime and shrinking during cold winters.

In Villa Kapla, as in all of our work, we have aimed at a contemporary architecture - without compromising on ecology and a high degree of coziness. 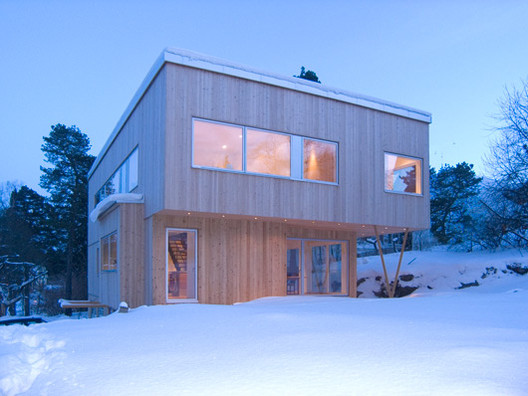