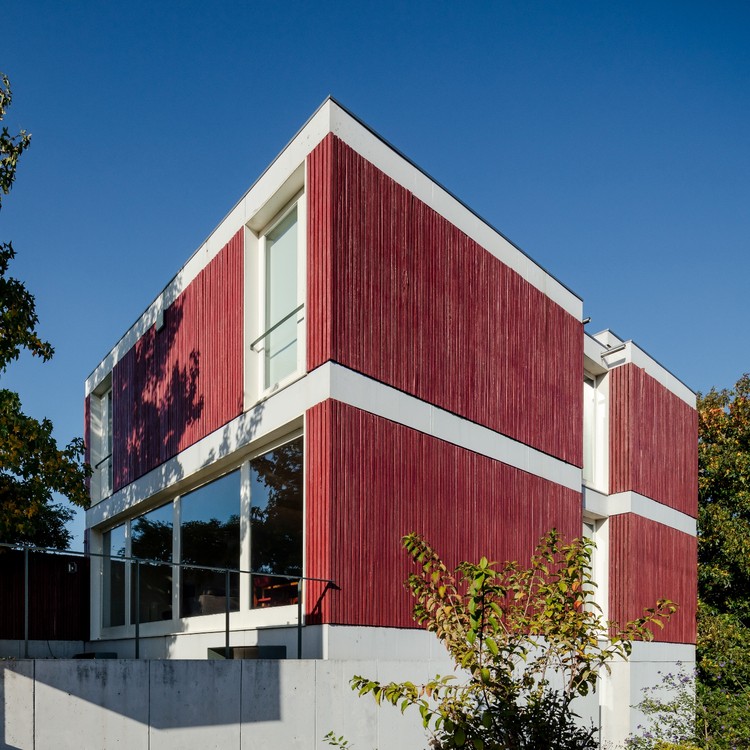 Text description provided by the architects. The project concerns to a single-family house, built on a plot of land with an area of ​​700 m2, located between the access road, at West, a land currently used for agriculture, to the North and another land, at  South and East, occupied with a residential building as well.

The materialization of the proposal is based on a rigid geometric matrix, which tries to find metrical and spatial relations between the constituent parts of the dwelling and the land, proposing the rationalization of the construction as opposed to the surrounding area. An intentionally designed and artificialized area is created, dictating the internal rules of the housing and the outer space, promoting a perimeter band of 3.00 meters wide, related to the natural topography, maintained as it is.

It is in the "core" that the proposal applies and solves the program and the connection of the various spaces that form and generate the desired experiences, from circulation areas, to work spaces, seating or resting, both external and internal.

The longitudinality of the plot allows to explore a succession of geometrically equal spaces, repeated along a path, and which develop in a substantially different way - the car access patio, related to the garage space; the outdoor garden space, related to the interior living space of the house; the outside patio of service, at the level of the basement related to the work spaces, closing and ending this succession.

The dwelling, except for the horizontal and vertical circulation space (torn north and south), now opens to the West (main living room and bedrooms), now opens to East (service spaces, or support spaces). In contrast, artificial light is drawn in the blind planes of the South and North facades and allows a game of contrasts that accentuates the transparent planes of day and highlights the opaque planes at night.

The construction of the garage next to the street and the consequent removal of the dwelling, allows to enjoy the slope of the land as a way to enhance a certain image of amplification of the architectural discourse, not only volumetric but also formally; the containment of the volume of the garage next to the street (a floor enclosed visually) and the expansion of the volume of housing (three floors open visually), also explores the relationships of the family with the house - intentionally directed to the landscape that has, from this point, a considerable development and participates in the comfort of each of the internal spaces.

The house also intends to be a refuge. Constructively the dwelling presents solutions that improve and reinforce the identity of its constituent parts, reflecting however its strict relation - it is intentional the will of the formal resolution of the proposed volumes through the application and exhaustive translation of the constructive elements that solve structural problems or of simple fulfillment of the vertical planes, assumed in their true dimension.

The objective was to validate a more distant solution of very sophisticated images and too well finished, allowing the identification of the constructive systems and the consequent integration in a markedly rural surroundings.