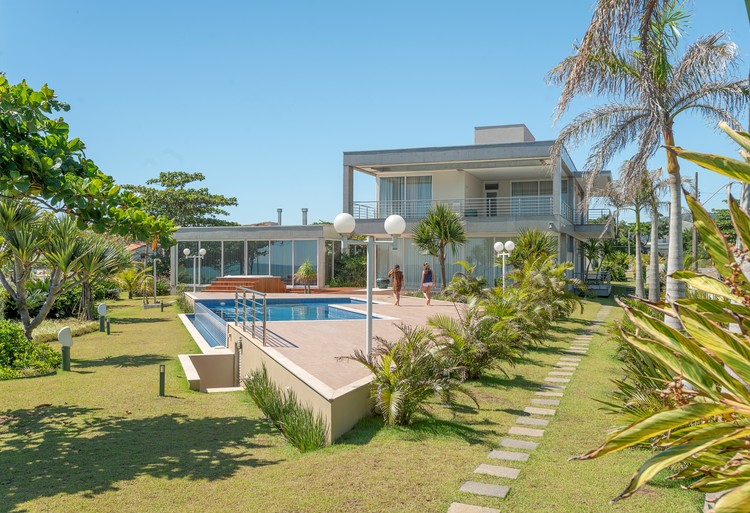 Text description provided by the architects. Located on the north coast of Santa Catarina State, Penha stands out for fun and beach tourism. The city is anchored by the Beto Carrero World theme park, in addition to 19 beaches. The CSP house is located on Armação Beach, with a privileged location facing the sea.

The structural synthesis configures the architecture of this residence. The skeleton of beams and apparent pillars format a heavy and floating volume. Robust beams and pillars format two balances in the structure of 4 and 6 meters respectively to the south and north directions. The social balcony is set to the north and the space used to shelter the cars is set to the south.

The supporting structure of the house is formed by beams and pillars in apparent concrete with dimensions of 30 cm x 70 cm.
The basement floor perimeter is composed of 6 apparent pillars. In the upper floor volume perimeter there are 8 apparent pillars, 4 of them being at the end of the balances.

The CSP house architecture seeks to express the power of structural truth. It is configured by a hollowed structure of concrete in the upper part. The upper terraces have trimmed ceilings and the basement floor has balances which format covered and open spaces that are integrated into the external areas.

The upper floor terrace provides the private sector of the house an open ventilated and illuminated space that allows a strong relationship with the external open space of the residence.

The terrace has a privileged view of the area and allows the structure of the house to be made explicit, which is the central idea of the architectural project. The non-closing of the terrace exhibits only its structural pieces, the subtle negative spaces between the beams and pillars, the cuts in the slab of the roof and allows the perception of this architecture and the relationship between the structure of the building, the local landscape and the program to be resolved in this case: a beach house.

The program was distributed in two built bodies: the main house with 2 pavements and the leisure area on the ground floor, as well as an open area with a swimming pool, a solarium, a garden, a kiosk and a spa.
A large setback was left in the northern portion of the terrain for implanting the main body and the low block.  The swimming pool and other open areas destined to leisure and coexistence were implanted in the free space in front of the sea, in order to allow the enjoyment of the view of the local landscape, marked by the beach, the sea and the horizon.
A small recessed area was designed in two steps with spa, fireplace and outdoor seating for interconnection of the three parts of the project, that is main block, low block and pool area.

The inspiration of this project takes into account the Brazilian modern architecture, as well as its design principles by giving attention to aspects like structure, lighting and natural ventilation as well as the relationship with the place. References have been sought in architecture and minimalist art, with an emphasis on basic forms, through straight lines and simple designs.