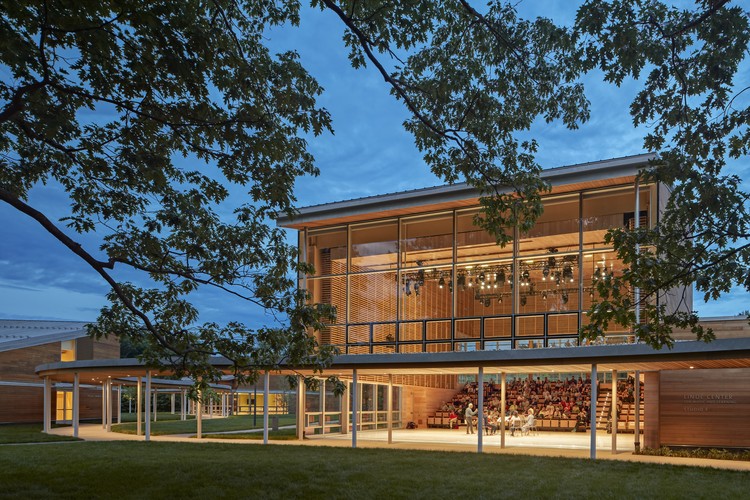 The new Linde Center for Music by William Rawn Associates has opened at the Tanglewood music venue in western Massachusetts. As the summer home of the Boston Symphony Orchestra, Tanglewood welcomes its first new performance facility in 25 years. The Linde Center was designed to provide additional concert and rehearsal space and create a truly multi-season facility.

The new facility will act as the central hub for a new paradigm in cultural programming for the BSO—the Tanglewood Learning Institute (TLI). As the team states, Tanglewood has become this country’s leading and singular destination offering the harmonious experience of music and nature. For 82 years, Tanglewood has served as a forerunner and model for summer music festivals throughout the United States. Its history of cultural and music benchmarks is complemented by varying architectural styles represented among the 100 structures and various architectural styles dotting the 524-acre Tanglewood campus.

Tanglewood’s landscape is the outgrowth of design traditions that shaped the Berkshires in the mid- to late 1800s; specifically, its recognizable profile exemplifies the period of the manor house and “cottages” in the Lenox region, with their picturesque, designed landscapes. Homes of this time, built as summer retreats for the affluent of New York and Boston, became an expression of what would be called “America’s Country Place” era. The Tanglewood grounds proper of 330 acres, with expansive vistas of the Stockbridge Bowl, is the result of combining two Victorian-era estate properties: Tappan (gifted to the BSO in 1938) and Highwood Manor (purchased by the BSO in 1986). When Seiji Ozawa Hall opened in 1994, the landscape boundaries formed between the two estates began to be peeled away in a dedicated effort toward creating a more unified campus.

The opening of the Linde Center for Music and Learning four-building complex in summer 2019 represents the fourth major milestone in the festival’s history, building upon Serge Koussevitzky’s founding of both Tanglewood, as the summer home of the Boston Symphony Orchestra, in 1937, and of the Tanglewood Music Center, the BSO’s acclaimed summer music academy, in 1940, and the opening of Ozawa Hall in 1994. A primary goal of the Linde Center is developing a new destination hub for social and performance engagement on the grounds. The four-building complex is perched on a slight ridge overlooking Ozawa Hall to the west, the historic 1841 gothic Highwood Manor to the south, and expansive views of mountains to the southeast.

The complex consists of a series of four single-level buildings situated around a majestic red oak: Studio E (with a maximum capacity of 270), the Gordon Family Studio (which can accommodate audiences of 60), and the Volpe Family Studio (with a maximum capacity of 40) and Cindy’s Café, with 150 seats (plus room on the patio for approximately 50 more seats), has been designed as an informal place for musicians and audience members to interact. Each structure provides views of the pastoral landscape and makes physical connections to the larger campus.

The four buildings—Tanglewood’s first year-round structures with both heating and air conditioning— embody a strong commitment to environmental stewardship. Natural ventilation and abundant day lighting in all the main spaces are designed to minimize energy use during the busy summer season. Other notable sustainable features include photovoltaic roof panels for solar energy; high-efficiency mechanical systems with low-velocity ductwork, meeting acoustic requirements; highly efficient LED theatrical lighting; water-saving plumbing fixtures; wood millwork harvested from renewable sources; and recyclable zinc-coated copper roofing. In addition to its uses by the TMC and TLI, the new building complex will also benefit the activities of the Boston Symphony Orchestra, including providing needed rehearsal space for the Tanglewood Festival Chorus, among other BSO-related rehearsal and concert activities.

In addition to their work for Linde Center, Doug Reed and Adrian Nial of Reed Hilderbrand have undertaken a campus-wide Landscape Framework Plan. It is the first phase of a multiyear effort and larger Tanglewood Horticultural Initiative. It is designed to elevate the quality of the visitor experience and to strengthen the landscape-defining features that have provided Tanglewood with its unique identity.

The Linde Center will feature concert use by the BSO, TLI, Berkshire community, and beyond, starting in fall 2019. 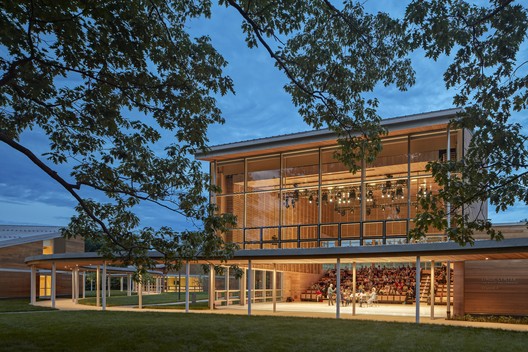