Bee Breeders have announced the winners of the SKYHIVE Skyscraper Challenge. The purpose of the competition was to allow architects, design students, engineers, and artists from all over the world to generate design ideas for iconic high rise buildings in cities around the globe. As part of this design series, participants were encouraged to incorporate new technologies, materials, forms, spatial organizations, and construction systems in their designs for a skyscraper.

Participants were given a brief with few restrictions on site, program, or height. Placing emphasis on the need for towers to respond to issues of density, the submitted design was requested to be limited to a site of 130x80 meters. Submitted projects focused on a range of topics. Each submission was judged based on the elements of its design that were deemed innovative. Special consideration was given to proposals that implemented innovative sustainable systems. In accordance with the competition brief, the jury also evaluated each entry based on its potential to serve as a new architectural landmark within its chosen geographical region.

Below we have published the three winners, including the BB Green Award.

The proposal questions the conventional flat-slab organization of high-rise buildings. It rethinks this arrangement by embedding a skyscraper with a host of new vertical connections, defining what is summarizes as a new “spatial experience, structural system, and circulation.” The exciting submission is complete with a number of excellent model photos and diagrams used to describe a curved floorplate that treats multiple levels as a single, continuous space.

‘Coscienza Intuitiva’ is meant to serve as a new form of public space and as a project constantly undergoing transformation. Located in the historic Italian city of Palermo, it is designed as an amalgamation of elements, typologies, materials, and languages. It depicts a tower of fragmented ruins. Through a series of precise drawings, it is formed by stacking historical architectural elements to form a vertical repository of culture and identities. The tower is meant to both display and be supported structurally by fossils of the city, a city that is never complete, but forever undergoing an architectural, cultural, and symbolic evolution

‘Tesseract’ is a model evolutionary tower addressed to incentivize home ownership. The concept proposes an architectural system that allows residents to take part in the design of their own units as well as the design of the programs within the building. Therefore the exact form of the tower is dependant on the specific users it attracts over time. Residents choose their preferred amenities and common spaces, and the building is therefore customized to reflect an unique identity. The submission includes an accomplished vertical section that describes well the intended variety of spaces such a building might contain. 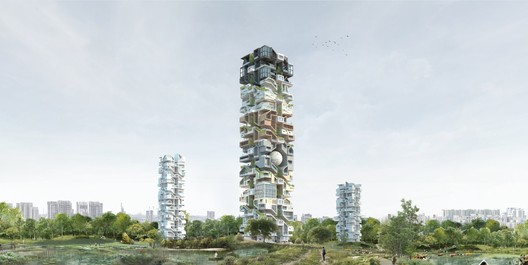