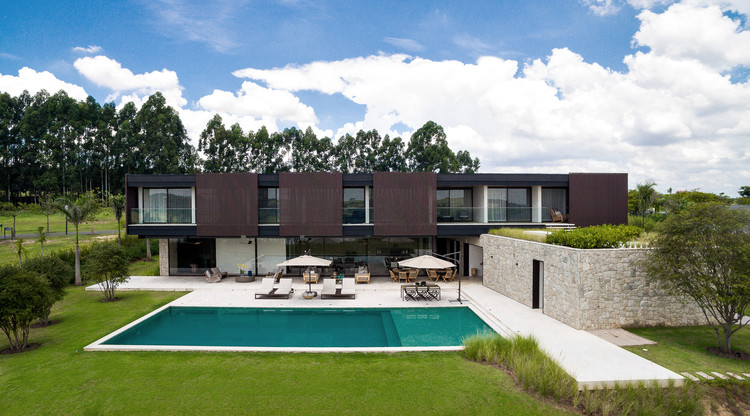 Text description provided by the architects. The house was conceived as a sequence, a film. From the street, all the observer sees are three solid, straight, regular, sober volumes. The first and the second, at the ground floor, telluric, act as supports for the third, much lighter, wrapped in brise-soleils. Whoever arrives can’t even notice where the entrance lies. It appears little by little, right in the intersection of the lower volumes, as one walks through the pathway to the door.

When the entry door is crossed all that can be seen is the lake, the green, the pool… almost as if the house itself was left behind. Even the social area can only be perceived when, after entering, you turn back. Once inside you can understand it’s the house's character, inconspicuous from the street. While reserved to the outside, to the lake it opens up completely, generously, lining up everything to equally receive sunlight. Deliberately choosing nature instead of the street.

To reach this effect, both forms and materials are the simplest and most expressive. All the ground floor is finished with rough stone, rustic and cheap. The exception being the home-theater, white and independent, that separates the social area from the playroom, more secluded. The services pavilion follows the same logic and contains the garage, technical areas, kitchen, laundry, housekeeper’s apt, barbecue and changing rooms.

All disposed perpendicularly to the social block, freeing the view to the permanence areas as much as possible and helping to frame the house. The upper volume is accessed only by a stairway discreetly placed behind the home-theater. There’s no room here for sculptural, complex forms. All the house is merely a frame to nature. Nothing can compete with the sun, the lake, and the green.

Resting over the stone support lies the private block. Couple’s, children’s and guest’s suites all line up to see the sun. The bathrooms are all internal, ventilated and illuminated by small private gardens. Whoever looks from the upper terrace can also see the garden above the lower block, accessed from the terrace itself. Another space for contemplation, reunion, celebration.