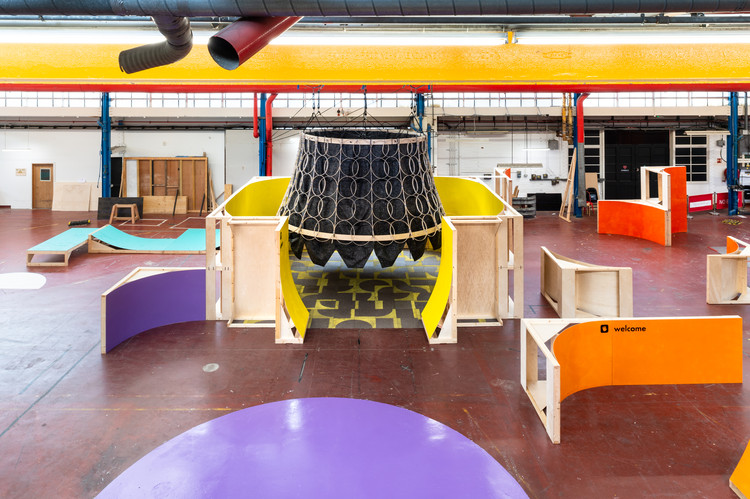 Over 100 local primary school children have designed and built London's first Mega Maker Lab in a former fire-engine-fixing hall. Sited in South London, the project is made to be a hub of activity instigated by the Institute of Imagination (iOi) and architectural educationalists, MATT+FIONA with designers Jestico + Whiles. The children came up with the idea that the design should encapsulates a journey to spark imagination in young makers.

Seven to eleven-year olds from Marlborough, Loughborough and Heathbrook primary schools came together to realize the Mega Maker Lab. Matthew Springett and Fiona MacDonald, Co-Founders of MATT+FIONA said, “This is our largest and most ambitious build yet. Like us, the Institute of Imagination believe that is a fundamental right for children to grow up with the opportunity to be creative and explore the world around them through design, making and first principles. It is wonderful to see how projects such as this bring communities together."

As the team explains, the children and makers set off on an excursion to find responses to a challenge they have been set, or one that they set themselves. There is an enclosed ‘Idea’ area for children to pool and share their ideas, away from the wider lab. Tool and making hubs enable the young designers to use real-life techniques to gain an understanding of robotics and inventive fabrication. There is also a test arena to see if inventions can move, float or fly, which opens onto a central social space where parents and families can participate and share their ideas. Gareth Binns, Chief Executive, Institute of Imagination said that, “The project aims to raise aspirations of the children involved and to give them the confidence to have their say on their built environment."

The Mega Maker Lab is made up of a landscape of ramps and platforms that suggest a route around the space, but allows children to make up their own pathways if they prefer. A series of elevated platforms provides seating as well as places to work at different heights. This undulating landscape also lends itself to become a test area where children can see how their creations respond to different scenarios. Aerial elements are suspended by a system of pulleys which allow the children to rise and fall for interaction with visitors, and to change the atmosphere of different parts of the Lab. The form and fabrication of these directly came from earlier design workshops with children.

The completed Mega Maker Lab will be open to the public throughout August, Tuesdays-Sundays 10am-5pm. The experience is for families and groups with children aged 5-12 years. 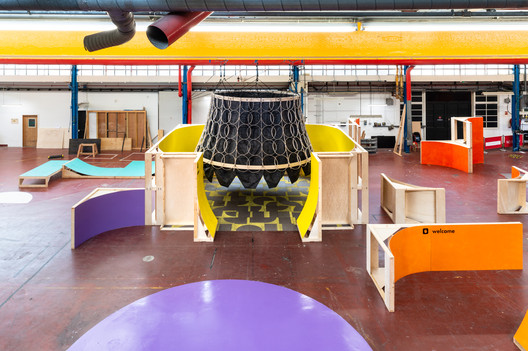