Save
The Two Most Dangerous Words In Architecture: Style and Beauty
Share
Or
Copy

"I hate this whole ‘beauty’ thing,” says a deeply talented architect and professor friend, reacting to an emerging ripple in the zeitgeist. He is not alone. Words are dangerous things. Since World War II, there has been a consensus mainstream in architecture: the Modernist canon. But change is coming in the profession—and in our culture.

The true believers cringe at the word “beauty” as a design criterion. They dismiss the word “style,” too. Like all orthodoxies, there is simply “right” and “wrong.” The realities of the “wrong” are writ large in architectural orthodoxy: “wrong” is anything allusive to anything but that canon itself. Closed-loop rationalization gives comfort to the convicted.

That straitjacket of aesthetic correctness has had backlashes. The 1980s blip of Postmodernism is now viewed as a temporary insanity, and the recent Neo-Classicist/New Urbanist approach is seen as “the other.” But I sense there is impending trouble in the force. Writings by Donald Ruggles, Alain De Botton, and Mette Aamodt, among others, argue that there is a fundamental, anti-intellectual reality in design: the innate human response to “beauty.”

It is undeniable that every one of us loves aspects of music, food, and art without any understanding, training, or evaluation. Parts of our lives delight us without reason, including the built world. Understanding this cause and effect has been extended by those thinking about how architects design, how we create the beauty that all of us experience. This freshly expressed investigation of the universal truth of “beauty” is potentially far more potent than any correct “style.”

After the election of Donald Trump, no one doubts that our orthodoxies can be deaf to some realities. If you asked someone in 1960 New England if religion would be central to our culture in the 21st century, there would have been shock that faith in the church was even questioned. But Trump won, religion in New England is dramatically losing relevance, and many architects are questioning the validity of an architectural canon based on top-down, intellectually justified aesthetics.

My friend’s negative reaction to the word “beauty” as a single, unquestioned (and, to some, incoherent) rationale for making architecture reflects the fact that some of the most intellectualized realities of our lives—in literature, music, art, and, yes, architecture—can be joyously moving. I was astonished this spring when an architectural historian with a doctorate in theology described the fully conceived meanings behind the beauty of the Sistine Chapel. Her insights underscored to me that is not enough to feel “beauty.” After 40 years as an architect, it is clear to me that if you want to create anything, you must understand and master the realities of what you are designing, rather than mimic what is seen as “correct” or safe.

Unless we know the nature of a recipe’s ingredients, we can only follow that one recipe that is made by others. But no matter how or why we make it, food either tastes good or it doesn’t. We do not enjoy the food we love because we “should.” We savor it for how it tastes. I think we all “taste” architecture, too. The recent focus on “beauty” recognizes the basic, yet idiosyncratic, reality of how we perceive, a perception that often defies the rationales of canon or style.

But confidence in “tasting” design is not enough. For whatever reason, we need justification for our reactions or devotions. Architects tend to cleave to a defendable rationale, so it’s not surprising that we often duck the question of what makes something “beautiful.” As a result, “style” replication dominates architecture, no matter the aesthetic. Unless we understand why we do anything, we only focus on the outcomes. In architecture, that means seeing beyond the outcomes of “canon” and “style.”

The failures and hypocrisies of 20th century architecture has created a fierce backlash. James Stevens Curl’s Making Dystopia calls Modernism a “catastrophe.” But this extreme argument feels as misguided as the academy’s mindless fealty to the status quo. Rather than rage, it’s time to think about why architecture means so much that it engenders that rage. I think it is because “beauty,” and the threat of its loss and perversion, is fundamentally important in our lives.

In the past decade, the motivations behind architecture have become more important, as a poor construction economy and technological change have called into question why we choose architecture as a career. There are now more questions than answers before us. So why we do what we do becomes critical. Anger at the closed loop of any orthodoxy creates people like young Martin Luther, who saw the monolithic intractability of the Catholic Church as denying the essence of Christianity. Perhaps something similar is afoot today: The essential motivator of architecture, beauty, has a newly imperative focus, as the very nature of practice is changing.

This past century has seen Modernism go from radical rebellion (similar to Luther’s) to the undisputed brand for aesthetic correctness in the corporate world. It’s a transformation so complete that critics from both the right and the left now label it a cultural evil. Getting back to the basics of why we practice architecture in the first place has vital meaning in this troubling time of cultural, technological, and political upheaval.

Architecture is more than building. Making useful tools and utilitarian structures is obviously not enough. As with all fine arts, the motivations and meanings in architecture are both primal and esoteric, genetic and acquired, reasoned and reactionary. Spaces and communities are humanity’s core commonalities. The one touchstone of design that serves as its goal and its motivator is that word, “beauty”—so elemental as to defy polemic. Perhaps that is why the word loses credibility in intellectual justification, but in the coming dominance of artificial intelligence, the awareness of what makes us human will become essential. 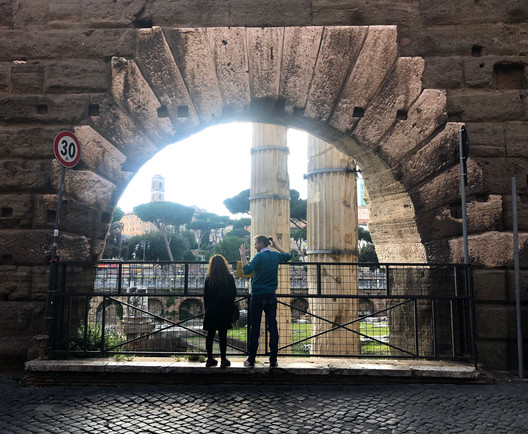