Save
SO-IL and BCJ’s Davis Museum of Art through the Animated Lens of Another :
Share
Or
Copy

The Jan Shrem and Maria Manetti Shrem Museum of Art by SO-IL and Bohlin Cywinski Jackson is the first contemporary arts museum for the University of California and the city of Davis. The museum’s signature element is the grand canopy that stretches over the surrounding site and building.

Creative duo another : have collaborated with music composer Yu Miyashita and released a short film that explores the geometric composition of the museum's structure in an exceptional way.

Inspired by the university’s abundant natural landscape, the aluminum canopy’s geometric composition creates a subtle play of light and shadow, drawing people from a distance. Laurian Ghinitoiu and Arata Mori, founders of another : took advantage of this duality between nature / architecture, and presented the project as a work of art, framing the areas where the patchwork-like canopy complements the surrounding lands, and the shadows decorate the structure.

Photographer Laurian Ghinitoiu and filmmaker Arata Mori have combined their visions and expertise in the field of visual arts and started another :, a unique approach to architectural display that merges film, art, architecture, and space.

SO-IL and Bohlin Cywinski Jackson are co-designers of the Jan Shrem and Maria Manetti Shrem Museum of Art, working with Whiting-Turner as associated architects in a design-build collaboration. 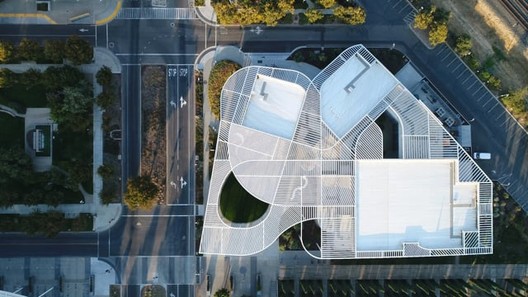