Save
House Between Trees / ARQLIQ arquitetura 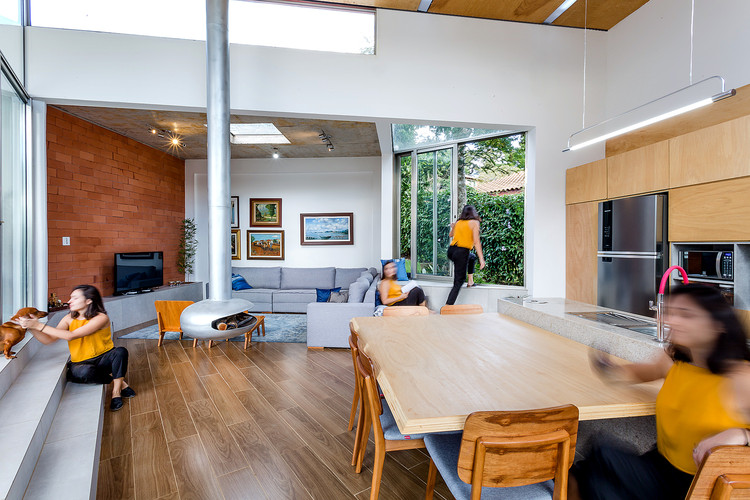 Text description provided by the architects. The premise of the project was to preserve the largest number of trees in the field, so the house plan follows a non-orthogonal tracing, bypassing them, so that their implantation occurs continuously and naturally, always preserving the contact with the vegetation and the internal/external relationship. Two rotating blind blocks and a detached cover make up the façade of the residence, revealing nothing of the interior and working them in such a way that the angulation of these volumes encourages and induces people to enter the space.

When entering the residence we find ourselves on the balcony, the large space integrator of the house welcomes the guests that when opening the main door do not come across the hall, as usual, but with a shelter, defined by being between different environments (garage, living rooms, and garden). In this shelter, the first sight of the guest will always be the first and only, since it will become different on every season, once nature itself changes the environment with the fall of the leaves, the harvested fruit, and the constant changes.

At the same time that the balcony creates a changing entrance door, it functions as the transition from the internal to the external, integrating all parts of the house; social, service and intimate areas can be accessed by them by creating a spatial continuity of the green with the interior, thus losing some of the "inside" and "outside" concept. The implantation is marked by the presence of 3 levels that follow the natural unevenness of the terrain. The first level (garage and balcony) is the arrival space, from it the second is -54cm below, marking the spaces of the rooms, kitchen and service area.

The intimate area is on the third level (-108cm of the second), arranged in a way so that the bedroom area creates a greater distance from the rooms, giving more privacy and allowing the rooms to open into the garden. The house was thought to be composed of three constructive systems. The garage, rooms, and kitchen in conventional reinforced concrete; the metallic covering unifying these spaces was used in order to overcome the 14-meter span of the balcony; the intimate area was built in structural masonry, which should only support the concrete flat slab.

All the spaces of the house were thought for living together; in the living room the architecture itself functions as an integrating space, the bleachers in the kitchen and the access steps, for example, can be places where people can accommodate; always connected with the inside and with nature on the outside. The house is not closed to the outside by the absence of windows to the street but tries to preserve its essence in its interior. 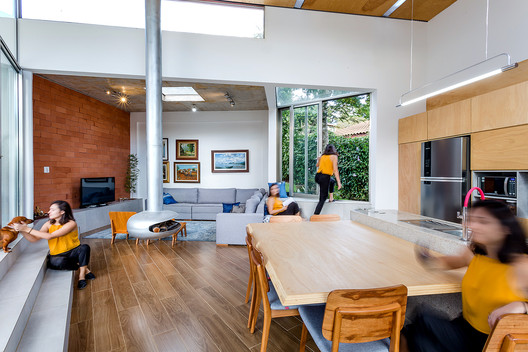