When an extension on an existing historical building is requested, often architects opt for glass, transparent and reflective interventions. Some decide to stay neutral and subtle when dealing with an older structure, while others choose a bold and outspoken design to manifest their contemporary character. With each project having its own conceptual motivation and reasoning, the outcomes are different and diverse.

Read on for some relevant examples, each responding to a different program.

The 1912 beaux-arts structure in Ottawa, home of the oldest national museum of Canada, underwent a restoration in 2010 by KPMB Architects. The building received a contemporary twist thanks to the addition of a glass entity on the entrance, replacing the initial tower removed in 1915 due to structural issues. The so-called “Lantern” allows the flow of natural light, improves the circulation and the configuration of spaces. This iconic intervention projected the edifice in the present era while consolidating its historical value.

Built as a cellulose and paper factory in the 1920s, the project in Tallin, Estonia is a rehabilitated office and housing complex to accommodate the new urban lifestyle. In fact, the initial boiler house, the main volume, created by the famous Estonian architect Erich Jacoby, is topped by a 6 story modern intervention, holding the residential units. The controversial project, wrapped in a glass envelope, is located on the main gate of Tallin, making it an integral part of the cityscape.

The Parisian based firm, Opus 5 architectes, transformed in 2012, an abandoned ruin into a music school and performance space, in the center of Louviers, Normandy. Actually, the original edifice built around the 1600s was first a monastery, then a prison. In order to accommodate a modern and functional program, a new extension was added to host the main orchestral hall. This simple rectangular box reflects its surroundings during the day, especially the flowing river beneath and the historical site, whereas by night it radiates and becomes a beacon of new beginnings.

This office block completed in 2000 in Prague, by Ricardo Bofill, was formerly an industrial hall circa 1890 where sheet metal boilers were produced. The once abandoned building has his base renovated, in order to preserve its historical value, and a new glass roof added, to modernize the project and create a subtle contrast between the past and the present. The new addition respects the original typology and creates an efficient workspace.

Designed by Coop Himmelb(l)au, the project is an extension for a law firm in Vienna, Austria. Completed in 1988, a new steel structure, a rigid arc creates a 2 story addition on the existing building, to accommodate mainly a large meeting room. Imitating a peeling phenomenon, the original roof seemed skinned off the edifice. The new skeleton directs the view and the lighting of the space, through targeted openings.

The commercial tower, inaugurated in 2006, comes as a 46 story addition to the original art deco headquarters for the Hearst Corporation designed in 1928 by Joseph Urban. This first LEED gold-certified skyscraper in New York preserved the historical facades of the original building and extended vertically through a diamond-shaped steel frame and glass. 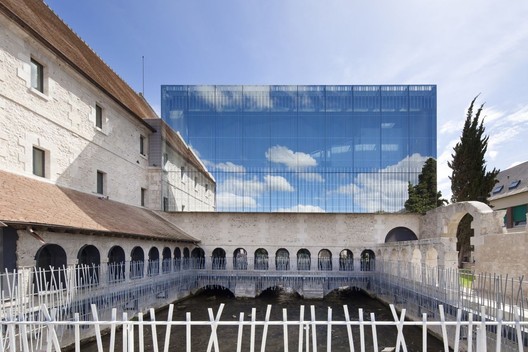