Text description provided by the architects. This is a small, private house in a dense urban neighborhood. Like a valley, the site is surrounded by buildings on all four sides; the client hoped to build a house that would bring about, even if modestly, a sense of peace and fulfillment between the inside and outside.

When I contemplated the rich and mature relationship between the inside and outside in our country's cultural climate, the first example that came to mind was the Katsura Imperial Villa (referred to as Katsura). The design of this small house began from my process of looking deeper into the Katsura in my own way.

As I studied the inside/outside relationship as evident in the design of Katsura, I rediscovered various elements that lead to its sense of pleasantness. I contemplated on ways to implement this knowledge-which I had extracted from the Katsura which also has a grand garden-in the small and dense urban "valley."

I thought that, if I cut into the Katsura's plan and rotate it so that it encloses into a circle, perhaps I could "fold up" the inside/outside spatial relationship into a compact version.

This resulted in a new form in which a shallow, engawa (veranda)-like space that connects and supports the rich inside/outside relationships extend in a three-dimensional circle, looping around. I would be very pleased if, through this project, I was able to demonstrate new possibilities for an urban house based on the uniquely rich and fertile inside/outside relationships of our country. 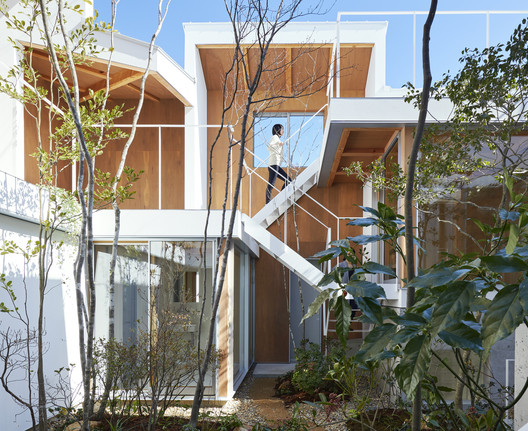