Herzog & De Meuron presented this week to the public their new vision for the cityscape and the urban life of Munich. The plan revolves around a former postal railway hub, the Paketposthalle, an impressive concrete structure built in the 60’s, used lately as a sorting office for general mail. The 87,000 square meters site was recently acquired by Büschl, a private group of developers, who commissioned Herzog & de Meuron to create a new urban study for the area.

The developed scheme consists mainly of mixed used facilities, privately and publicly financed housing, spaces for business, social and cultural activities. The newly added functions are intertwined together through an existent and upgraded transport infrastructure and a newly developed green network. In terms of sustainability, the plan suggests a reduction of the subterranean building volumes, cutting down on the emission of the CO2.

“The Paketposthalle is an extraordinary example of engineering, which will be open to guests and the residents of Munich in its new function as a place of culture and encounter. It will become the nucleus of a new, dense and mixed neighborhood like the one in the center of the city.” Jacques Herzog

The purpose of this urban renewal is to create a new focal point for the city, where a contemporary city life can thrive. The 3 main strategies presented through this proposal are the reuse of the Paketposthalle as a public roofed multidisciplinary space, the introduction of two 155m height mixed use towers in the city’s skyline with a curved detail to merge gracefully with the existing, and the establishment of a new district of six-storey courtyard buildings creating a small-scale urban communal atmosphere. 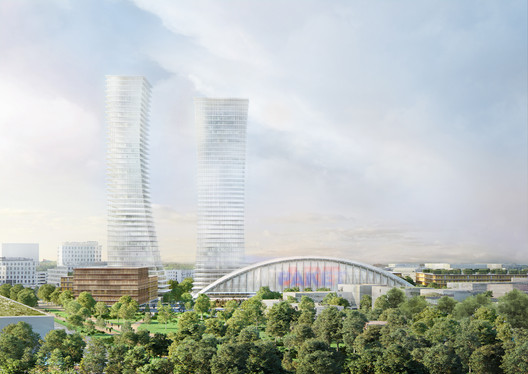