The importance of nature and sustaining it has become a crucial feature in most contemporary projects. While some architects sustain nature by constructing with environmental-friendly material, others make way for the greenery to intervene with the structure, blurring the boundaries between man-made and Earth.

For the Chungnam Sports Center design competition, ANU Design Group created "Edgeless Sports Park", a series of oval-shaped structures that complement the hilly landscape and merge its greenery with the architecture. 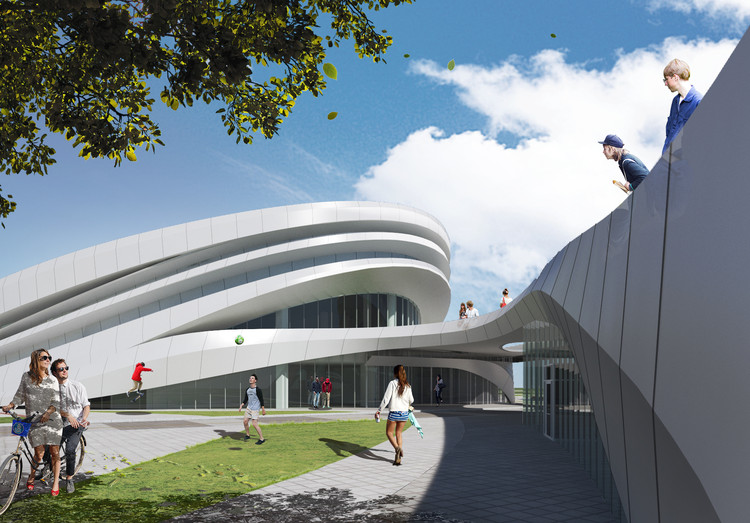 Located on the Youngbong Mountain, the plot has been radically expanded reaching Hongye Park, the South Chungcheong Provincial Government Building, and eventually ended up with the South Chungcheong Sport Center. Although the project is located next to the city's infrastructure such as sewage and waste facilities and a co-generation plant, but the site was isolated from the city.

A spatial urban sequence was developed to break the boundaries between natural landscape and the city, and between the citizens and sports. The features included the regeneration of the site as a sports cultural space, the resource circulation through urban infrastructure, and natural landscape through the city.

The city's landscape was an integral element throughout the planning process and schematic plans, as the architects wanted to create a spatial interaction between the nature and architecture. In order to give the sports center the ability to embrace its green surroundings, the architects chose to design three round-shaped buildings without edges as opposed to the triangular plot, and allowed nature to intervene with the buildings. To connect the three buildings together, a set of communal bridge were implemented between them.

The end result is an organic-shaped horizontal landmark with a three-dimensional landscape.