Save
Steven Holl's Kinder Building Tops Out
Share
Or
Copy

Steven Holl Architects and McCarthy Building Companies Inc. have celebrated the topping out of the Nancy and Rich Kinder Building for the Museum of Fine Arts, Houston, Texas’ oldest museum. The 243,600-square foot building will house modern and contemporary art once completed in 2020.

Located in the heart of Houston’s museum district, the building will feature a translucent-glass exterior, three floors of galleries that circle a three-story central atrium, a 200-seat theater, street-level café, restaurant overlooking a sculpture garden, and pedestrian tunnels to surrounding buildings.

The Museum of Fine Arts, Houston expansion is entering its final phase and we are excited to see this project come to fruition. We’ve been challenged with a great design and working with interesting components for a structure that is a work of art in of itself. Our teams have been able to showcase McCarthy’s abilities on this museum expansion project and have enjoyed being an integral part of the museum’s goal to bring art to the public.
-Jim Stevenson, McCarthy Houston Division President

Permeability is a key strategy surrounding the new museum building, shaped by “gardens of horizontal porosity and open on all sides.” Seven gardens “slice” the perimeter of the campus, marking points of entry. The largest central garden court serves as the entry point onto the main campus grounds.

A unique feature of the building’s design is its distinctive sliced-canopy roof. Steven Holl Architects describe the roof as “concave curves, imagined from cloud circles” that “push down on the roof geometry, allowing natural light to slip in with precise measure and quality” – a key feature for its top-lit galleries. The undersides of the ceiling elements also reflect light onto the interior gallery spaces.

The scheme broke ground in 2017, after Holl was selected to design the museum Selected through an international competition in 2012 among finalists Snøhetta and Morphosis Architects. 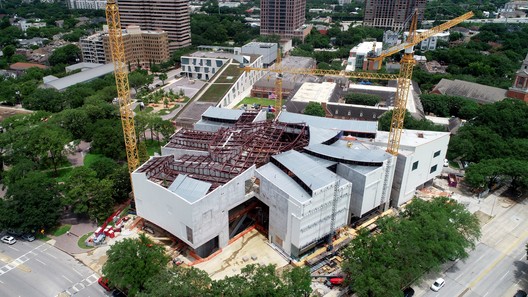