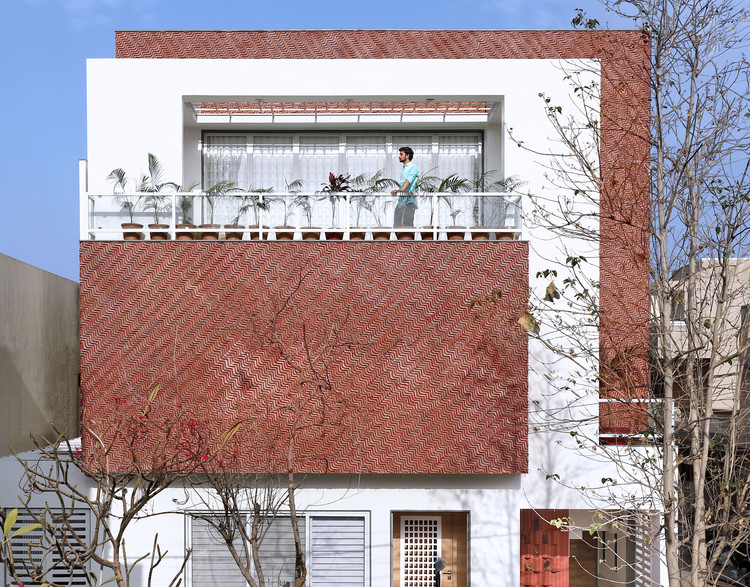 Text description provided by the architects. This refurbished private residence is located in Vadodara; Gujarat, India, which is planned in an organized manner, where the voids create air corridors in the internal as well as external spaces. Each space possess 2 large openings in opposite directions for ample of airflow and natural lighting into the spaces, creating a warm and illuminated space.

Each space functions in its own aspect by amalgamating visual connectivity across levels, through punctured  huge balconies, projecting out on different levels and sides. Also the second floor balcony glazing is covered with a large canopy that features as a barrier  at the same time makes the space look voluminous. The canopy acts an interactive link with first floor covered balcony and also illustrates the roofing  patterns emerged from the clay tile arrangement in metal grills, making it look as a whole connected frame mass.

The west facade has no openings on first floor, which provides a large surface area for clay roof tile elevation adding to its rich textural quality of the facade. The designing team, explored and identified waste, recyclable, cost effective and longetivity in clay roof tiles as a material.

Here, the use of ridged V-shaped sloping roof clay tiles as a vernacular material of dimensions 10" height X 8" depth X 4"wide, has been interestingly transformed into a captivating contemporary elevational facade, creating a series of continuous pattern.

Here the ratio of 40% of waste clay tiles at free cost and 60% of new clay tiles at Rs 10 INR per piece, were collected, cut into 6-8 parts of 1" wide, which are fixed in with chemical solution against the available perpendicular surface of wall at 45˚ and crafted into a customized series for obtaining an everlasting beauty and endless zigzag pattern formations of the facade.

Furthermore, the layering of  this horizontal and vertical clay tiles is designed on the basis of sun's movement from south to west direction throughout the day as per Indian context, which keeps the area shaded by reduction in temperature.

An illusionist display is casted on the uniform surface of the wall through these angular patterns, which transforms the solid form into more organic mass. Thus this, urban refurbished  dwelling in clay roof tiles facade, carved out its own character through contrasting  red colored earthy textures and in volumetric masses, becoming a distinguishing  dwelling amongst the surrounding street. 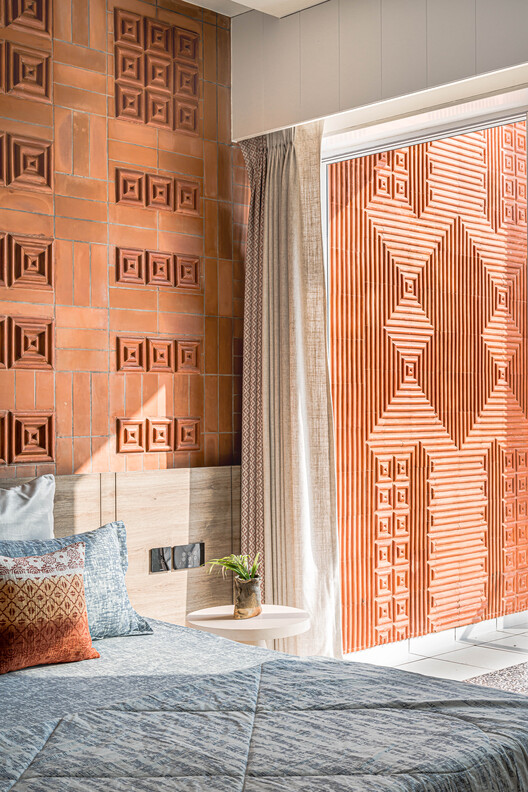