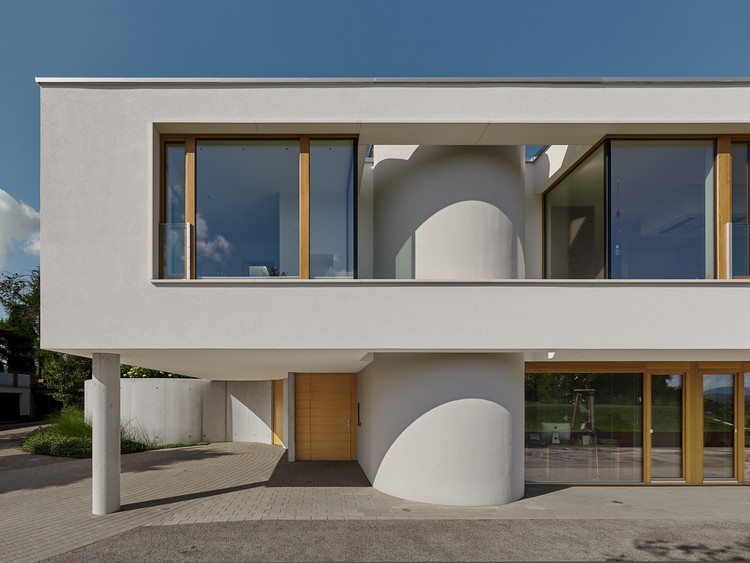 Text description provided by the architects. The location of the building on a small hill of the outskirts made it possible to create a 360° view of the rural surroundings and the village buildings near Heidelberg. The 2-storey building devides the hillside property into a courtyard open to the street in front of the ground floor and a private, secluded garden area behind the building. On the ground floor are the house access, garages and two offices, which are oriented to the courtyard. On the slope side storage and technical rooms are housed.

The living rooms are located exclusively on the upper floor, which opens with a south-facing glass facade to the garden with mature trees. The floor plan of the elevated and apparently floating above the garden upper floor, is based on the modified concept of a south-opened atrium house.

In the centre of the living floor kitchen, dining and living area are the meeting place of the family. Docked on the side are the two sleeping areas. The children’s area is oriented to the west, the parent area to the east. This allowed separate retreats for the family. The structure of the building consists of a reinforced concrete construction. The glass facade consists of ceiling-high sliding elements and fixed glazing. The frames of the glass facade are made of oak. Closed facade surfaces were plastered with minerals. The building is largely self-sufficient due to the building technology used and the highly insulated shell.

The photovoltaic system supplies the heat pump and the mechanical ventilation system with electricity. When choosing materials, it was important to use materials that were already traditionally used in the region. Local construction companies guaranteed the high-quality execution of the work. The strong colours in combination with the oak give the interior a warm and homelike character. 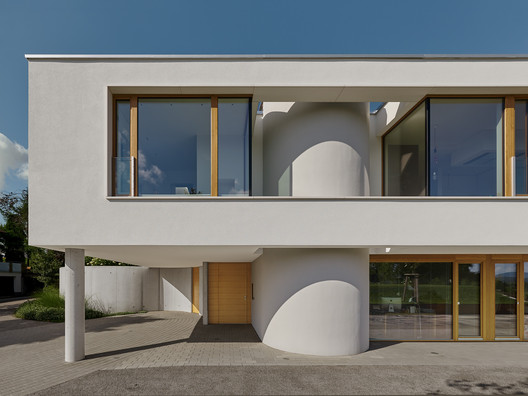