The relationship between the human body and architecture has always been a key element in architectural design and practice, however, the connection between the two wasn't documented or even accepted until the rise of ergonomics some years ago. Nowadays, the question is how is the body perceived in modern times? How does this perception influence the way we design the buildings and spaces that we inhabit? Too often, ergonomics is seen as a discipline that emphasizes the separation between body and object; however, not only is it the connection between them, it is also the pre-established blueprint that maximizes and synchronizes their productivity. At its most basic level, it's a technical discourse on the increasingly mechanized human dwelling.

Ergonomics is the science of how we relate to objects, making it a fundamental element of industrial design and, consequently, of architecture. The undisputed forefathers of this not-so-old way of perceiving the world are: German architect Ernst Neufert and industrial designer Henry Dreyfuss, who are known worldwide for their famous 'Architect's Data,' first published in 1936, has now been edited over 39 times in German and 16 in Spanish, has been translated into 18 languages, and has sold over 1 million copies to date.

The effervescence of the modern movement was based on a more structured and intricate vision that forced architects to look at all the elements of a space through the same lens, elements that influenced and modified how the human body was perceived. As studies advanced and normalized the application of these manuals, this recycled vision of the war was used constantly and without question and even though it sought to make way for the new by clearing out the old, its language and means of production always remained rooted in its origins.

Neufert's formulation of man as a "target," however, is much more complex. On the surface of the matter (and ergonomics is about surfaces), the target to which Neufert refers is a universally applicable average and ideal: a norm. As is well known, normativity is not limited to bell curves, nor to the simple settling of averages; as the medical-philosopher George Canguilhem has shown in his pathbreaking work on The Normal and the Pathological, "the normal...increases the rule at the same time that it points it out. It asks for everything outside, beside, and against it that still escapes it. A norm draws its meaning, function, and value from the fact of the existence, outside itself, of what does not meet the requirement it serves. The normal is not a static or peaceful, but a dynamic and polemic concept.
- Harwood, John. Chapter 4 The Interface: Ergonomics and the Aesthetics of Survival, Governing by Design: Architecture, economy and Politics in the Twentieth Century. Published by the University of Pittsburgh Press, Pittsburgh, Pa., 2012.

As George Canguilhem states, this aesthetic image of human proportions lead to a standardization problem in which we find an abstract and idealist archetype that sought to encompass a model of the human body in which it was represented as an object.

Understanding this, Paul Gisbrecht shows a series of images that critique 'Architect's Data' by Ernst Neufert, –which shows a uniform, regular, and, above all, measurable body--displaying an approximation that rejects everything outside the established norms. The series, titled 'Human-Reification' re-interprets Ernst Neufert's drawings through photos of a real woman that display the trajectories of everyday movements as a way to understand her place in the space she is occupying. 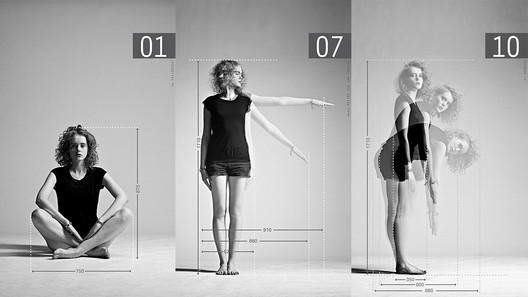