Henning Larsen and Topotek 1 have won the open competition to revitalize Esbjerg Bypark, a historic harborside park in western Denmark. The project will be made in collaboration with artist Eva Kock and engineers Ingeniør’ne. The design for the 30,000sqm revitalization aims to create a green cultural framework to reshape the city's urban identity.

As the team outlines, Esbjerg Bypark dates back to the city’s founding, as early residents planted fir trees along the waterfront’s steep terrain to prevent coastal erosion. As the city grew so did the harbor, eventually cutting off public access to the natural waterfront, leaving the leafy park effectively landlocked. The establishment of Esbjerg’s Music House and Art Pavilion in the late 1990s on the park’s northern edge brought new crowds to the city center but pushed the park itself further from the public eye. The new design emphasizes the park’s existing attributes, adding new paths, plantings, and artistic water elements to make Esbjerg Bypark the jewel of the city once again.

“We didn’t design a park because the park was already there,” says Salka Kudsk, Head of Landscape at Henning Larsen. “Instead, we are reconnecting the city back with its environment. It was initially practical, holding the sand in place and protecting the city from the wind. Over the years, it became a gathering place, but this identity has become less strong in recent years. In our new design, it will offer sensory experiences all year around, establishing it once again as the heart of Esbjerg.”

The new design includes a number of water features that reestablish the park’s former relationship with water in the public realm. Linking the park internally as they thread through the landscape, these elements also play into the contrasts at the heart of the park’s transformation: from the din of the harbor to rustling trees and running water, the damp of the sea to the crisp reflection of the mountain lake. These elements also offer new points of social connection for visitors who pass through, activating the entirety of the park.

The design was revealed in a public ceremony in Esbjerg on 18 June 2019; it will be developed further with the City of Esbjerg and its citizens. The design is currently on display in the Esbjerg Music House, where it is open to public view. 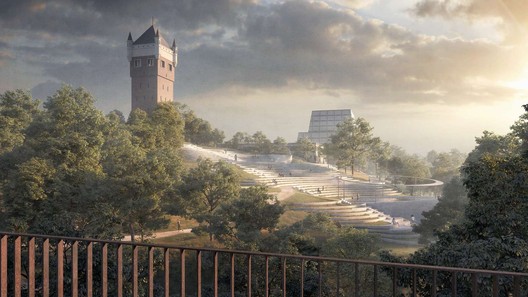