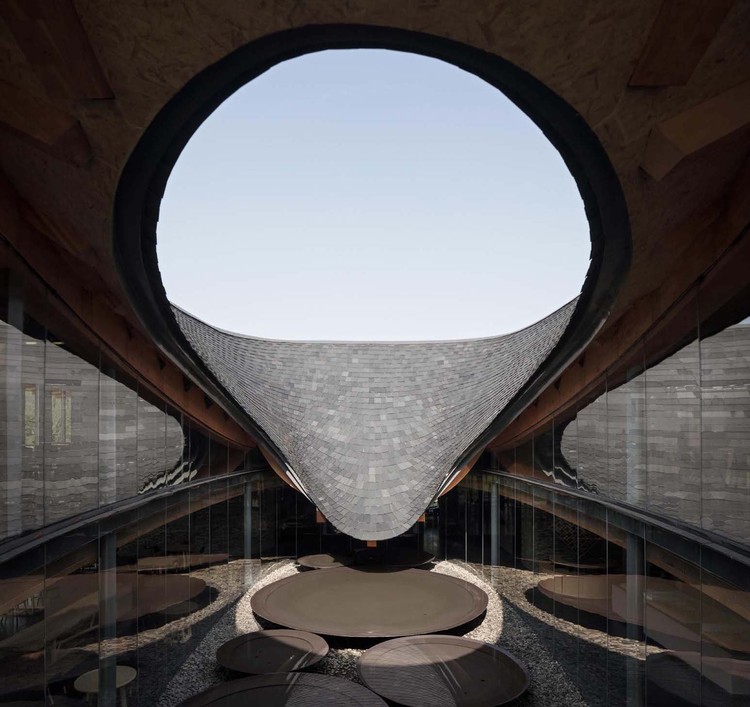 Text description provided by the architects. Inkstone House OCT Linpan Cultural Center in Anren, Sichuan is located in the middle of the Linpan area of Anren Town, Dayi County, Chengdu City, Sichuan Province. It is adjacent to the Qimu River in the west and surrounded by large fields and bamboo forests. The design tries to integrate into the original natural landscape, continue the material and spatial elements of the traditional buildings in Western Sichuan, explore the coexistence of architectural culture, construction, and the combination of locality and emerging techniques under the guidance of structural performance-based approaches of digital fabrication, integrating local concepts and new technologies.

Linpan Landscape Complex
The Western Sichuan Plain has a long history and a unique Linpan landscape. Linpan can be said to be a complex landscape model integrating production, life and landscape, whose life and architectural form have evolved into a cultural symbol in the long-term historical accumulation, deeply imprinted in the folk customs of Western Sichuan. The freedom and wildness of rural life are naturally revealed between the bamboo and rivers.

The planning and design concept starts from Passing by Anren, a poem by Huang Jian of the Song Dynasty. The natural and humanistic scenes depicted in the poem are the starting point of our inner perception of the place.

As a demonstration center for the future redevelopment of the Linpan area, we try to create a spatial symbiosis pattern of new buildings and traditional Linpan. The Qimu River and the surrounding Linpan vegetation are fully protected, and the building is surrounded by a large area of ​​vegetable land, maintaining the living experience of farming and Linpan culture. Therefore, we didn’t choose a land that is easy to identify by the side of the road. Instead, we hope to create a path that perceives nature, while multi-layered experience scenes are realized through Linpan cascading.

Future Spatial Experience
There are all together three buildings in the spatial layout, including the corridor, the cultural center and the agricultural service auxiliary building.

As an entrance to the whole building complex, the composite corridor design integrates the sloping roof into countryside infrastructure system. In the future, the tea kiosk, souvenir shop, running station and other functions will be introduced, which will redefine the publicity of the Linpan living lives. The entire corridor is floating above the landscape, preserving the habit of local animals and natural ecology, transforming the flow of villagers and tourists into an architectural space. It learns from the traditional types of surrounding countryside, and brings in future spatial experience through computational design.

The design concept of the main building is derived from the inkstone of traditional Chinese calligraphy. The overall outline of the building is stable and upright. On the basis of which, the bottom layer is relatively solid and stable following the intention of reconstructing the pedestal and roof of the traditional Chinese architecture; the second floor is elegant and flexible. But the two are intermingled, having dialogues with each other, forming a series of topological deformations between the formation and the intention. At the same time, the roof is leaned towards the inner courtyard through an elegant curve to connect the boundary of the sky and the earth, and to rethink the elements of the place and their relationship, which make the elements of traditional Chinese architecture closely related to the contemporary non-linear aesthetics. This is also the original intention of our growing Linpan Habitat model.

The two-story patio depicts the future “leisure” life of the Chengdu Plain. The ground floor is equipped with display, reception, conference, communication and corresponding auxiliary functions. The second floor is mainly a series of independent rooms of different sizes for either tea tasting, instrument, meals and playing chess, etc. interacting with nature. Stepping up the gentle slope along the brick facade, you will experience first a relatively closed space. But as the sight rises, the field landscape gradually unfolds. The scenery and the experience are different as the sun rises and falls, and the seasons change, providing a unique place to experience nature.

In addition, the agricultural auxiliary earth-covering building with brick walls is mainly used to support the storage of tools for the farming rotation over the entire area, as well as auxiliary functions such as rest and meals.

While “using small material unit” is the fundamental logic for traditional Chinese timber construction, the laminwood and the combination of steel and wood has explored new possibilities of contemporary timber construction. In the architectural practices of today’s scenic countryside construction, we try to dig deeper into the traditional wood frame innovation and continuation under the new material and structural technology. The architectural structure of the Inkstone House OCT Linpan Cultural Center forms a light and transparent space with steel columns. The steel-wood composite structural roof achieves a simple and warm overhang space with a combination of variable-section laminated wood beams, steel square tube beams and steel I-beams.

In the main beam of exhibition center, the H-shaped steel beam with variable section is used as "ang" of “bucket arch (Dougong)”, the traditional Chinese Timer structure. One end of the H-shaped steel beam extends outward to support the wooden beam and forms a bending moment to the beam-column joint. The other end of the H-shaped steel beam extends inward to support the internal wooden beam to form a resistance moment, realizing the balance of roof at the beam-column joint. H-shaped steel beam and wooden beam are connected by steel plate and bolts. The connection is reasonable, fireproof and beautiful, force transmission is clear and good rigidity is achieved. Steel-wood composite cantilever beam has realized the comprehensive demands of material, structure, space and form. The cantilever wooden beam shows that timber has excellent performance in terms of horizontal stretching. The upper H-shaped steel beam bears the tension and avoids the problem of instability. H-shaped steel beam improves the internal force of overhanging glulam beam and realizes balance of roof by lever principle. Steel-wood composite beam doesn’t sacrifice the space under the eaves and realizes the modern translation of spatial elements “deep roof overhangs” of traditional Chinese architecture in a contemporary and concise way.

Digital simulation and optimization are fully applied in the proportional adjustment of steel-wood composite materials: for the steel-wood composite cantilever main beam, the wooden beam can be flexibly adapted according to the height and length of the variable-section steel I-beam; The overhang ratio of the steel beam can improve the bending moment of the stud joint. Meanwhile, the component section size is optimized to the minimum. For the variable-section laminated wood beam, the real-time topological analysis of the beam is performed by the millipede, and the analysis result is used as one of the reference factors for beam section optimization. Since the geometric information of the components is based on the same parameter system, the feedback adjustment of structural parameters and geometric parameters is very flexible and efficient. The main beam finally realizes the “outer straight inner curve” double-line variable-section. The form of “outer straight” is beneficial to the laying of the waterproof insulation, and the “inner curve” is the result of structural performance optimization.

The façade brick wall design is based on the traditional stretcher bond, extracting the gray scale interference of the river image, adjusting the rotation angle of the singular layer of bricks, and then comprehensively balancing the formal logic and digital fabrication logic, and optimizing to complete the final facade design.

In addition, the building's roof is paved with dark blue shale tiles, providing a unique spatial experience and architectural language by optimizing the geometric shape, division of the tiles and the overlapping areas of the pavement.

“Digital wood fabrication” is especially important for buildings with numbers of shaped components. The section of the roof structure and the steel-wood joints are perfectly and efficiently presented by milling. In the steel-wood structure construction process, based on the model data guidance, non-standard steel and wood components are prefabricated in the factory, and the on-site assembly is completed in less than one month, achieving good cost control.

"Robotic plastic 3d printing fabrication" effectively uses renewable plastics. The customized mass production can be widely applied in the vast township scenes in China. In this project, this technique is widely used in indoor auxiliary structures, such as partition walls and furniture seats.

Inkstone House OCT Linpan Cultural Center in Anren, Sichuan realized the first composite application of various digital fabrication techniques in rural China. The wildness and delicacy coexist within the building, promoting the dialogue and blending of technology and culture, just as the temperament of the forest, and the ecological background of Linpan. This is also a continuation of the local soul. We hope that the experimental construction of this project will introduce the concept of intelligence, greenness and industrialization into new countryside, and provide a new annotation for the future construction of beautiful rural areas in China. 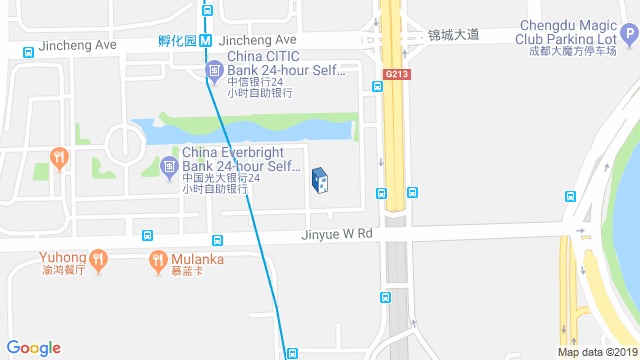 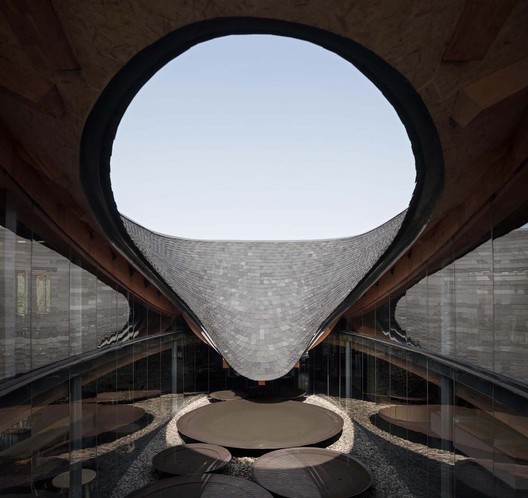