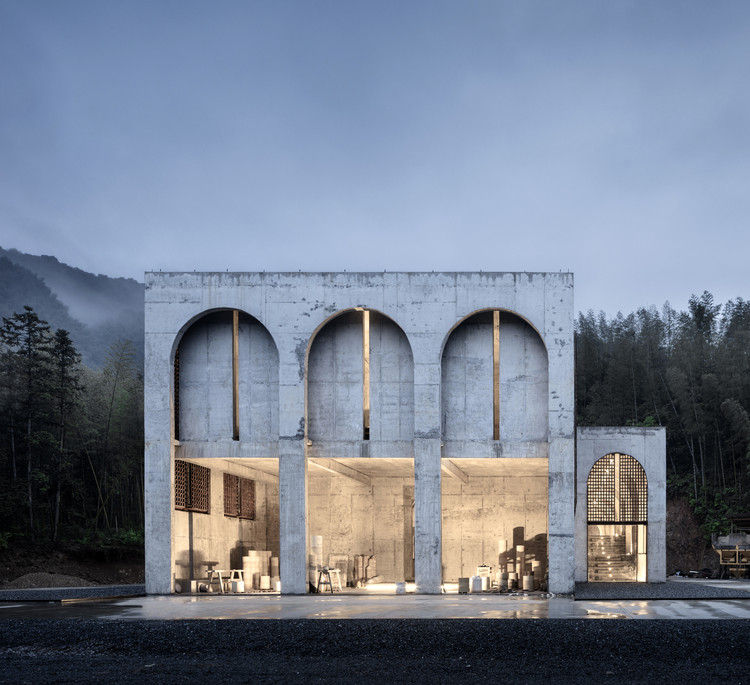 Text description provided by the architects. The county of Fuliang was once under the administrative jurisdiction of Jingdezhen, the Porcelain Capital of China, and is known as the origin of the Porcelain Capital. The Gaoling Ancient Mine Ruins in Fuliang is also a holy place for international ceramics culture. Located in Fuliang’s Qiancheng Village, BingDing Wood kiln is less than an hour’s drive from the urban area of Jingdezhen. The site is surrounded by mountains and bamboo forests in a tranquil environment.

Jingdezhen wood kiln is named after the locals’ preference of using the Chinese “Horsetail” red pine wood as a form of fuel, and has been the symbol of the industry for nearly 2,000 years. Like any traditional craftsmanship that has survived over more than one millennium’s history, it is suffering from the impact of modern technology and new ways of firing. Due to the difficulty in controlling the wood consumption and the firing effects, the development of wood kiln is hindered. In recent years, with the widespread adoption of coal and natural gas fuels in the newer industrial technologies, as well as the impact of environmental protection requirements, wood kiln is facing a threat of extinction. At present, the construction technology for Jingdezhen egg-shaped wood kiln is only inherited by the 70-years-old Mr. Yu Hezhu and his three or four apprentices. This gives rise to the threat that the construction technology may soon be abandoned in the long history of humanity.

As a practitioner zealously interested in revitalizing the traditional kiln, the project owner, Mr. Yu, began to learn from the 83-year-old master, Yu Xunquan in 2012 for kiln calcining, and then studied under the local’s only successor of the wood kiln technique, Yu Hezhu, to learn the kiln building technique in 2014. BingDing Wood kiln is the masterpiece he completed with his teacher, Yu Hezhu. The construction of the complex double-curved brick arch masonry for the egg-shaped wood kiln can only be based on experience, neither there are any blueprints for reference during the entire construction process, nor is there any written documents exitsing so far.

There will be many visitors entering and participating in the entire porcelain firing process. The observation axis on the second floor is centered toward the kiln and is encircling the building, so that the vivid spatial relationship between buildings and kiln can be perceived from different angles, highlighting the core position of the kiln. The BingDing Wood kiln is a ceremonial space, where the kiln workers have a sense of pride in their work, and also where a strong sense of awe towards both the traditional crafting technique and the unremitting spirit of craftsmanship can be felt unanimously by the visitors.

Concrete formwork are not fixed by ordinary mounting bolt in the construction of the concrete structure in BingDing Wood kiln, but rather a supported by the steel structures outside the concrete form for casting. In addition to the fair-faced concrete, the main material of BingDing Wood kiln is only the kiln bricks for the kiln. The arched window holes above the second floor of the building project form patterns of light and shadows with the lattice inlaid by kiln bricks.

In the beautiful and tranquil hilly village of Qiancheng, Mr.yu and his wife as well as the local government hope to bring more attention to the Jingdezhen ceramic industry and new opportunities for rural craftsmanship inheritance and economic development, along with the revival of the wood kiln. In Chinese culture, porcelain has never only served as a necessity for daily life, but also an important container for the sentiments in life. 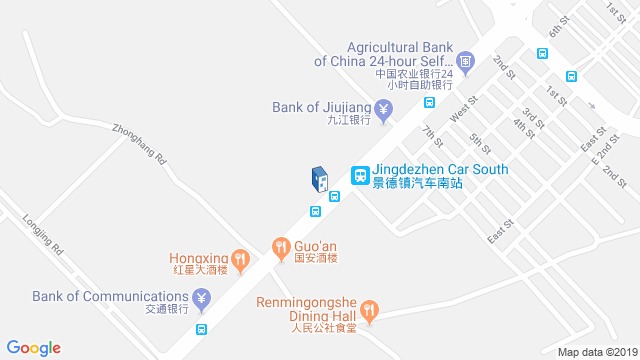 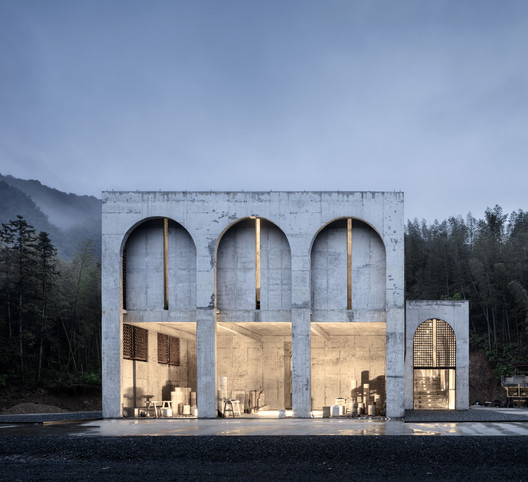