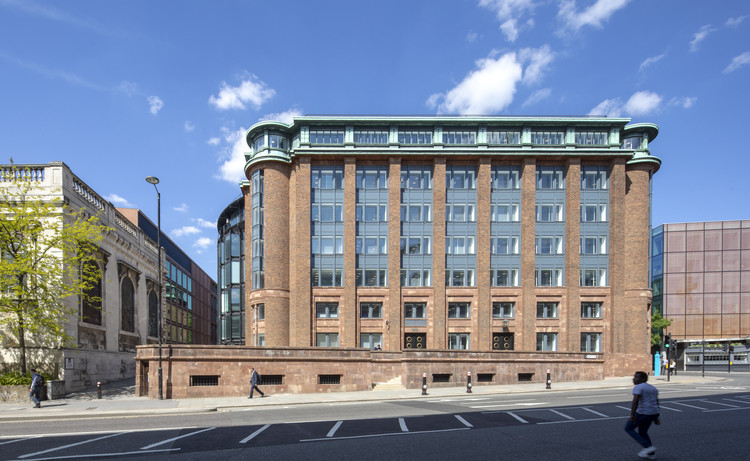 Text description provided by the architects. John Robertson Architects (JRA) has completed the refurbishment of Bracken House in the City of London on behalf of the building’s owner, Obayashi Corporation. Bracken House was designed by Sir Albert Richardson in 1959 as The Financial Times (FT) headquarters and was extensively remodeled in the high-tech style by Michael Hopkins & Partners between 1988 and 1992. After an absence of almost 30 years, JRA’s sensitive refurbishment has made it possible for the FT to return to this iconic building.

The 200,000 sq ft office building is located adjacent to the precincts of St Paul’s Cathedral and is widely recognised as one of the City of London’s finest twentieth century buildings. It was the first post-war building to receive listed building status and has been awarded a Grade II* listing twice, first in 1987 and again in 2013. JRA’s transformation required a complete overhaul of the office accommodation after a quarter of a century of use. New internal courtyards have been created to resolve the level changes between the main office floorplates and the historic wings, improving the ease of movement for occupants and creating unity between the designs.

The office floors have been upgraded to meet the standards of a twenty-first-century news organisation, with large open plan areas and working spaces. The office areas now feature state-of-the-art LED lighting and energy efficient air conditioning systems. Increased daylight has also been introduced via the atrium roof, where glasscrete has been partially replaced with clear glazing, after consultation with Historic England.

The building’s main entrance hall on Friday Street has been enlarged by relocating the original glazed partitions and timber louvres, offering new business lounge areas and a visual connection to the atrium. This, coupled with the removal of an existing timber trellis and external planters, creates a more active street frontage. At the Cannon Street entrance, JRA has sensitively restored the classical features of the building whilst improving accessibility and strengthening the connection between the old and newer sections of the site. The ‘Hollington Staffordshire’ pink sandstone cladding – an integral part of the FT’s salmon pink branding – has been repaired and cleaned as part of the refurbishment work and referenced in the use of new pink paviours on the roof levels of both 1950s wings.

At roof level, JRA has returned to Richardson’s inspiration, the Palazzo Carignano in Turin, to create the undulating form of the landscaping for a new roof terrace, delivering a significant area of outdoor space for occupants of the building in the heart of the City. Now complete, the ‘fifth elevation’, as originally envisioned by Michael Hopkins, provides 21,500 sq ft of open space, featuring planting, seating and a rooftop promenade against the backdrop of St Paul’s Cathedral. JRA delivered the base building and Cat A works for Obayashi Corporation and used Building Information Modelling (BIM) level two on the project to assist with design coordination and to manage clash detection. The finished model contains over 27,000 items charting every aspect of the construction, which will enable repairs and replacements to be carried out effectively in the future. Cat B fit-out was undertaken by Perkins + Will on behalf of the Financial Times Group. 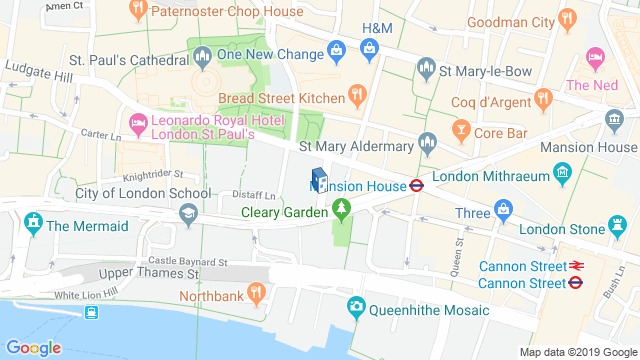 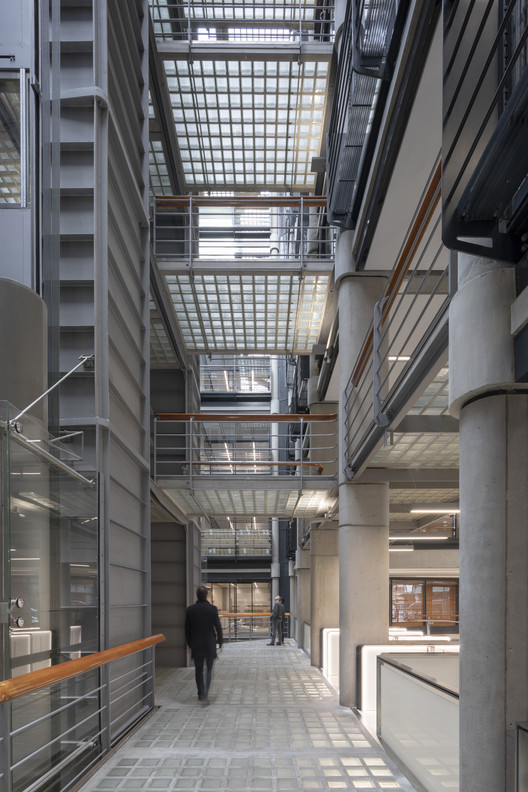 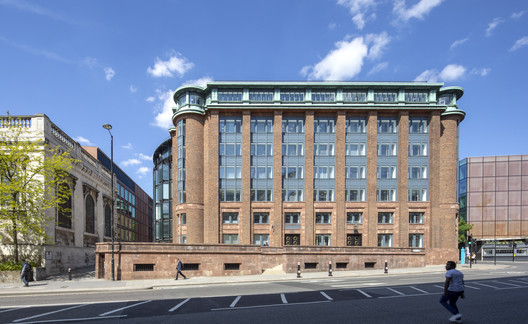