Save
Arata Isozaki Accepts the 2019 Pritzker Prize
Share
Or
Copy

Arata Isozaki has officially received the 2019 Pritzker Architecture Prize, in a ceremony at the Château de Versailles in France. Isozaki, who has been practicing architecture since the 1960s, has long been considered an architectural visionary for his transnational and fearlessly futurist approach to design. With well over 100 built works to his name, Isozaki is also incredibly prolific and influential among his contemporaries. Isozaki is the 49th architect and eighth Japanese architect to receive the honor.

The ceremony is held each year at an architecturally significant site around the world, with the choice of location of the ceremony reinforcing the importance of the built environment through a unique setting. Built in 1624 by Louis XIII, Versailles has been a UNESCO World Heritage Site since 1979. In 1995, Tadao Ando was honored with the Pritzker Prize in Petit Trianon, a small chateau on the grounds of the palace.

The laureate received $100,000 and a bronze medallion, based on the designs of Chicago architect Louis Sullivan. On one side is the name of the prize, while on the reverse, three words are inscribed, “firmness, commodity, and delight,” recalling Roman architect Vitruvius' fundamental principles of architecture of “firmitas, utilitas, venustas.”

Learn more about the 2019 Pritzker Prize by revisiting our coverage here. 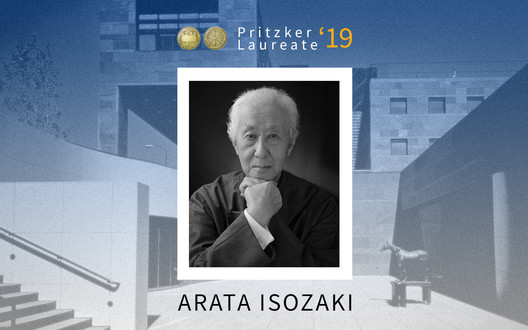