Studio Octopi has revealed a new site for the Thames Baths project along the Royal Docks in London. Dubbed the East London Baths, the latest addition was unveiled at SAM Swiss Architecture Museum in Basel, Switzerland. The project was designed to reintroduce swimming in the River Thames and re-establish a link between Londoners and the city's historic lifeblood.

The SAM Swiss Architecture Museum’s exhibition focuses on the phenomenon of river swimming in urban spaces. Part of the exhibition presents international projects that are attempting to realise Swiss-style river swimming in their local contexts. Alongside Thames Baths, exhibitors include Flussbad Berlin, POOL IS COOL in Brussels, Ilot Vert in Paris and from North America, Charles River Initiative in Boston & +POOL in New York. All of the proposals demonstrate how various cities are approaching the task of opening up their waterways to everyone as places for swimming and recreation.

As the Octopi states, unlike previous locations in central London, the team has had to embrace new constraints and opportunities with an area undergoing dramatic change. The Thames Baths project dates back to 2013, when it was launched as part of the London As It Could Be Now programme developed by The Architecture Foundation alongside Richard Rogers and the RA. Having been selected as one of five groups to envision new ideas for activity on the Thames, their proposal became more concrete in 2014 when they formally released plans for a floating freshwater pool off the Victoria Embankment. 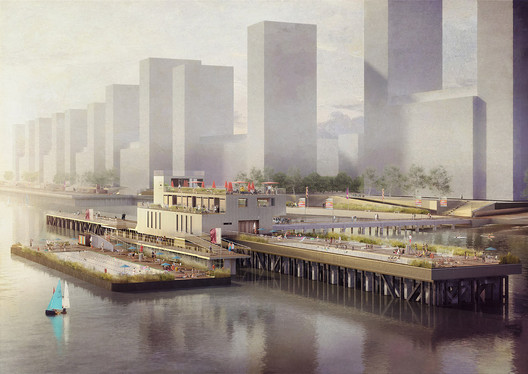