150 first-year EPFL architecture students are creating architecture installations and gardens around the Buvette d'Evian near Lake Geneva in France. In response to a request from the French-speaking Switzerland chapter of the Swiss Architects’ Federation (FAS), EPFL agreed to study how to better protect architectural heritage even outside of Switzerland. Students tested their designs on the Swiss side of the lake before construction, and the new designs aim to bring La Buvette back to life. 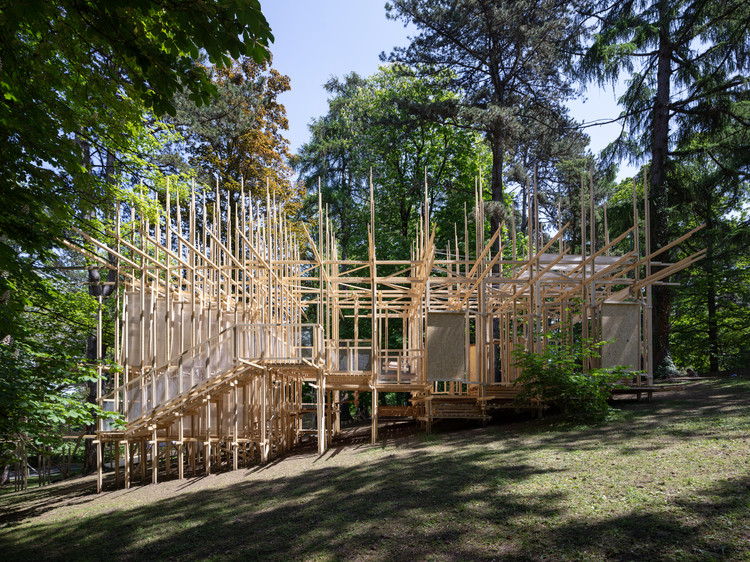 Students took a look at the Lake Geneva region from both an environmental and heritage standpoint, with a particular focus on two sites: Patrick Bouchain’s La Grange au Lac and La Buvette d’Evian, which was built in 1957 by French architect Maurice Novarina, structural engineer Serge Ketoff and builder Jean Prouvé. Under the project, the students first spent the winter semester learning about the role architects can play in helping to preserve a local ecosystem. Then in the spring semester, they built the wooden structures that will be assembled near the two heritage sites in Evian. The students’ architectural designs include stages, a projection screen, a garden, a lookout area, a greenhouse, water swings and a bird wall. The project is being spearheaded by EPFL’s Design Studio on the Conception of Space (ALICE) with the goal of reviving the La Buvette area.

Part of a broader initiative The French-speaking Switzerland chapter of FAS has been studying options for renovating La Buvette d’Evian since 2014. “Through this renovation project, which EPFL’s Laboratory of Techniques and Preservation of Modern Architecture (TSAM) had already worked on, students from ALICE are contributing to a broader initiative to redevelop the whole site. The initiative includes Lausanne’s and the Lake Geneva region’s bid to host the International Union of Architects’ 2023 World Congress, as well as the 2020-2023 Leman Architecture Connection (LAC) – a Franco-Swiss program carried out in association with the Haute Savoie office of architecture, urban planning and the environment. Each of these projects has its own strengths and aims to turn La Buvette and the surrounding area into a high-caliber cultural center that forms an integral part of the Lake Geneva landscape,” say Jeanne della Casa and Sarah Nedir, the two presidents of the French-speaking Switzerland chapter of FAS.

According to Dieter Dietz, an architecture professor at EPFL and the director of ALICE, the renovation of La Buvette, an icon of modern architecture, could also help forge closer ties between Switzerland and France. “I don’t see the “La Buvette” project as specific to Evian, but rather as part of an infrastructure that encompasses the whole Lake Geneva region. La Buvette could help strengthen ties that, while they do already exist, are not very visible. Things may have changed since the 1970s, when each side of the lake clearly represented two separate countries, but this relationship could still be taken much further. Through our various partnerships on this project, we are trying to build a coherent cultural and territorial narrative."

The work of EPFL’s students in Evian is part of a new ALICE project called Becoming – a three-part exploration patterned on the HOUSE 1, HOUSE 2 and HOUSE 3 series of wooden homes constructed in turn in Lausanne, Zurich and Brussels. With Becoming, Dietz advocates a concept of architecture in constant flux and that upholds the new value system our society must adopt if we are to save our planet. “Our goal now is to learn how we can situate ideas and spatial constructions, in relation not just to our society but to life in general and our natural resources, and how we can anchor architecture so that it can both be and ‘become’ – hence the name for this new three-part series,” he says.

The revamped site will be inaugurated at a ceremony on 28 May, which will be attended by representatives of the City of Evian, FAS and Evian Resort. 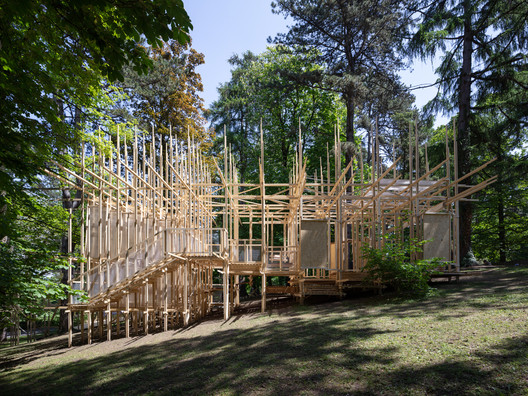