OMA and KOO LLC has been announced as winners of an international competition to design an innovative Center for the Arts on the University of Illinois at Chicago campus, serving as a gateway between UIC and the world. The scheme was one of three proposals chosen as finalists for the center, joining Johnston Marklee/UrbanWorks and Morphosis/STL.

We are honored to be awarded this project that will serve as a new cultural anchor for the students of UIC and the city of Chicago. Our design focuses on fostering dialogue between performance and the public — the new building will be a connector between the city and UIC’s urban campus. In collaboration with the College of Architecture, Design, and the Arts and the School of Theatre and Music, we hope to create an openness and extreme accessibility by introducing a new platform for the diverse activities of UIC.
-Shohei Shigematsu, Partner, OMA New York

Initiated in 2017, the new Center for the Arts is part of UIC’s 10-year master plan and will be built on a vacant lot at the northwest corner of Halsted and Harrison streets. 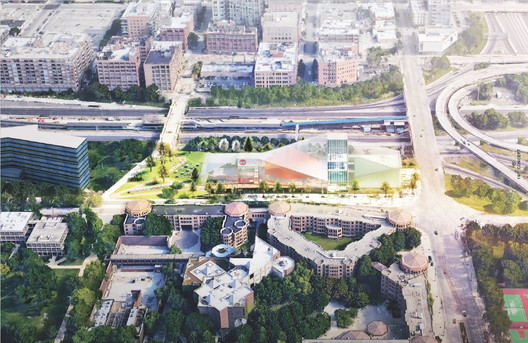