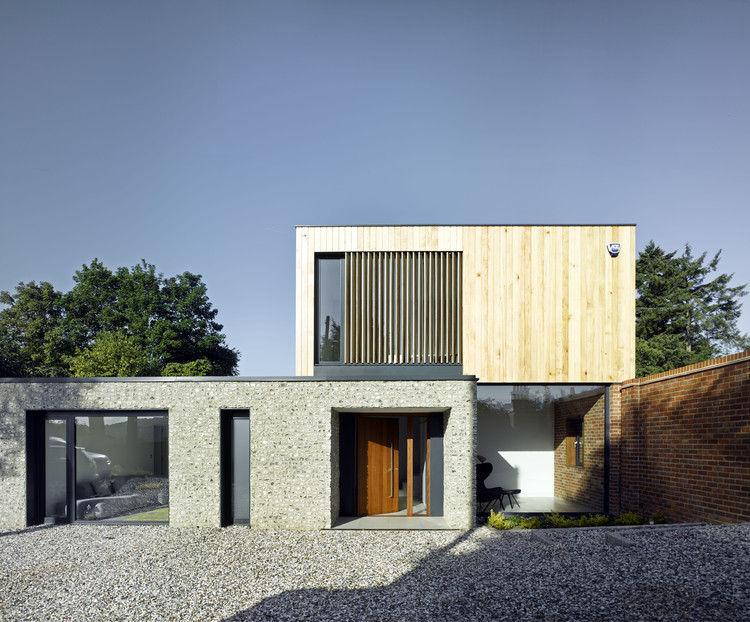 Text description provided by the architects. The relatively constrained site sits just off the road between Reading and Oxford in West Berkshire, midway between the two hospitals where both clients work as consultants, adjoins a wonderful one-acre walled garden that forms part of the site but outside the residential curtilage.

As the site raises a couple of meters front to back, and with the overall height strictly controlled by planning restrictions, the house sits level so that the inner courtyard becomes partially sunken as the ground rises, increasing the sense of enclosure. The house, therefore, sits between two worlds – a courtyard and a walled garden.

A single-story wing containing guest suite and study occupy the front beneath a sedum roof, while the main living spaces face south to enclose the courtyard and are set back beneath the upper floor to shade the fully glazed wall. A large open plan kitchen-dining-living space faces into the courtyard and porcelain tiles slide between the two, blurring the indoor and outdoor living experience.

The upper floor contains bedroom accommodation within a timber-clad volume that sits above the rebuilt red brick of the walled garden, which culminates in a chimney that ties both volumes together. The master bedroom sits at the end of the house perched about one meter above the rising ground, so has a large window that slides into the wall with glass Juliet balcony, so from the bed, the house feels as if it is floating.

Children’s bedrooms open onto the walled garden view, while a final bedroom faces towards the Chilterns across the valley to the east, while a partial vertical slatted screen protects the privacy of houses nearby. The ground floor walls to the house are faced in flint, derived from the adjoining Grade II listed former schoolhouse, while the upper ‘box’ floats above the garden wall and is clad in sweet chestnut boarding.

The courtyard is designed to have a ‘zen-like’ calm and simple, so contains a square of mown grass, a pool and a single Persian Ironwood tree. The house has a ground source heat pump that serves underfloor heating. Formal heat loss calculations to BS EN 12831 determined a peak power demand for spatial heating of 10.7kW.

To provide sufficient power for rapid hot water cylinder recovery to support two bathrooms and two shower rooms a 14kW Swedish heat pump system was installed. Carbon emissions which have been reduced by 50% compared to equivalent services provided by an oil-fired boiler.