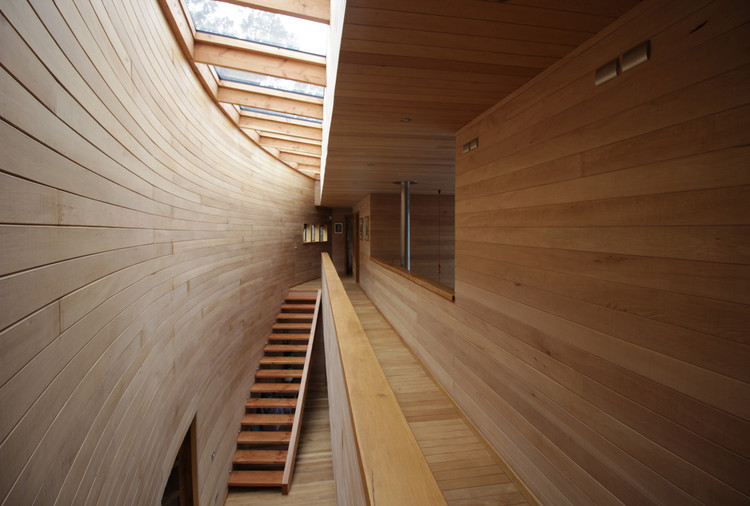 Text description provided by the architects. The terrain is characterized by being a kind of plateau between two slopes that fall towards the Ranco Lake in southeastern orientation, having there its main view towards the landscape. The site is dominated by a large Laurel and a coihue, in addition to preexisting rocks. The north orientation is located towards the upper level of this plateau, from where the winds and rain come in winter, while the south is towards the access and the neighboring site, from where the prevailing winds come in summer.

With this, a curved wall is proposed that closes towards the hill of the west and opens towards the east, towards the lake, privileging the view and the morning sun, and avoiding the north winds and rains in winter and the winds from the south in summer. From this gesture, the volume of the 3 level house is created.

The house seeks to accommodate 3 family generations, which is why the project makes use of the underground, where a bedroom / workshop and a bathroom are located, which also forms a concrete base that isolates the wooden structure from the ground.

The first level contains the common spaces and the master bedroom, in addition to access through a chiflonera and a terrace roofed to the east. Meanwhile, on the second level there are four bedrooms and 2 bathrooms, 2 bedrooms and a bathroom located to the south and the others to the north joined by a bridge that balcones the double height of the main living space. This bridge has upper windows that provide light and sun in the afternoon.

As previously mentioned, a concrete base is proposed where a wooden structure modulated in a 122 cm grid is supported. Inside the house is covered with boards of mañio in walls and tepa in floors. In addition, black slate stone is used in the access and wet areas - bathrooms and kitchen. On the outside, the east façade is covered in a brown toned Northway fiber cement while the curved wall is covered in pre-painted black zinc, both with its corresponding ventilated air chamber.

The achieved atmospheric quality is constituted by the wood's intrinsic warmth and by the multiple ways in which the light filters inwards, cross views are promoted between the different spaces, oriented towards the landscape and contained by the light that falls on the boarding of the curved wall that surrounds the interior. 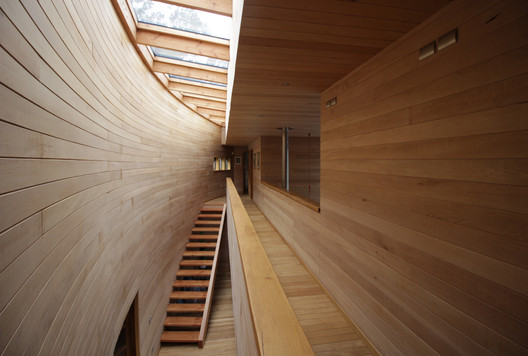