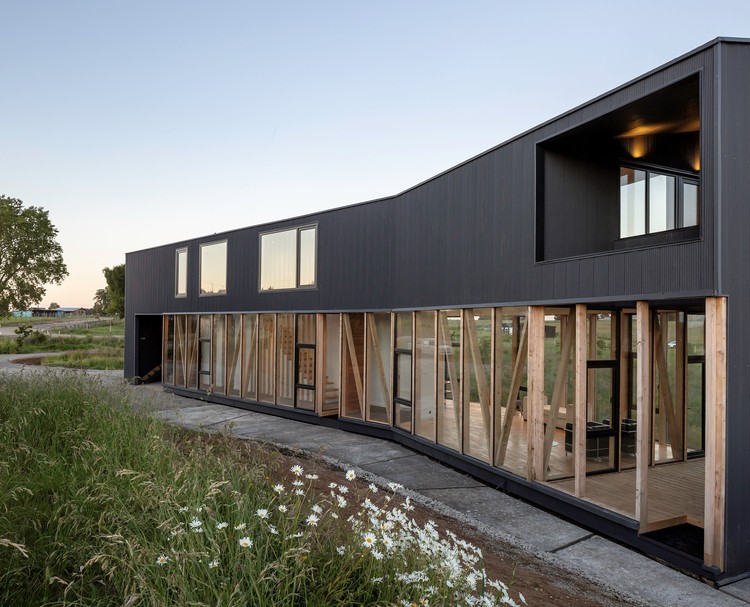 Text description provided by the architects. The house is located in the X region of Chile, in the City of Puerto Varas. This is an area of ​​the country that is characterized by it Patagonian weather, with a long rainy season which determines a way to build and inhabit tied to the idea of ​​shelter and protection.

Because it is an assignment that was developed remotely, we start by raising, together with the topography and the views, all the information regarding the weather, the rain, the temperatures, the predominance of the wind and the angles of incidence of the sun in this latitude. This is how we decide the orientation and location for the project that starts by taking height from a hill of Maitenes to face the east, towards its view of Lake Llanquihue and Calbuco Volcano. The angulation and twisting of the volume allow; first, minimize exposure to the direction of winter rains; second, stimulate cross ventilation for times of higher temperatures; and third, optimize sunlight as required by each site.

The order of the premises is distributed in two floors, according to their degrees of privacy, the first, with greater transparency, concentrates the access, the living and service spaces. These common areas open, by the west to a patio controlled by the slope and the pre-existing trees, and by the east towards the views of the Mountain range. The second floor concentrates the bedrooms in general, hence the volume closes to protect these spaces that also reach a greater mastery of the landscape.

On the materiality it is worked with a mixed structure of dimensioned pine and cypress pillars to the sight those that are visible to the outside from assembly system, in wood, that constructs a curtain wall of transparent thermopanel crystals. In the rest of the facades are coated with pre-painted corrugates metal plates that favor the waterproofing of the construction, in space on the faces that are mostly exposed to wind and rain.