Background and Challenges
The site is located between two ferry stations on the Huangpu River of Shanghai with a 1.2-km shoreline，which included municipal facilities such as water, power and gas plants a century ago. A large number of factories related to textiles and manufacturing have brought a long-term prosperity which has continued to promote the growth of industry-related population. The population density of Yangpu District now has exceeded 20,000/km2, which makes the lack of public open space of the aging communities.

The vacant buildings and abandoned docks from the post-industrial era prevented people from entering the river and also cut off the walking flow along the river.

Another big challenge is the flood control system. Based on a high-density city of more than 30 million people, Shanghai implemented a strict standard against the threat of a 1000-year flood. Therefore, the top elevation of the floodwall is 2 to 3 meters higher than ground level，making it impossible to see the river.

In 2015, Shanghai developed a three-year program to connect shoreline in the downtown area of the Huangpu River, creating a continuous public open space for the city. In Yangpu Riverfront, this work is coordinated by the Pujiang Office, including land use and negotiation, planning and guidelines, and construction management. In earlier 2009, designers began to conduct preliminary analysis and research work as the basis for the final landscape design.

3-WAYS and Healthy Lifestyle
In the downtown area of the Huangpu River, the way of walking, jogging and cycling form the greenway system, which is called “3-WAYS”. From Yangpu Bridge to Xupu Bridge, the 45-km length is exactly the same as a marathon. The site is one of the endpoints.

The 3-WAYS plan is an important milestone in the transformation of riverfront space from closed to open, and it has also promoted the entire 6.7-hectare park project. Through the elevated pedestrian bridges or trails, all breakpoints such as ferry stations, tributary rivers, offshore high-pilewharfs, and sensitive areas are linked tocreative a continuous walking flow.

High-density cities likeshanghai generally lack open space, especially for outdoor exercise. “3-WAYS” redefines the riverfront and encourages a healthier lifestyle. Specially painted jogging and cycling ways attract sports enthusiasts. The walkway space on the riverfront is suitable for the elderly and more sports activities on the docks. Ramps are designed in most of the entrance for people with mobility impairments. The service station along the 3-WAYS provides rest, replenishment and simple medical treatment. Every day, it is full of energetic people of all ages.

More trails extend from 3-WAYS to the surrounding business district and residential community, forming a convenient pedestrian transportation network. With the connection of bus stops, subway stationsand ferries as water transportation nodes, Yangpu Riverfront can serve farther in the future.

Industry Legacy and Renovation
All high-pile wharfs were retained and reused to avoid unnecessary new construction costs and a reduction in water area. The wide scale and carrying capacity are ideal for venues for large events.The 10-ton dock crane was completely retained as a new visual focus. The form of the crane caster is applied to the bench design and placed on the preserved track near the riverfront. The original concrete floor was smoothed by shot blasting, retaining the traces of use. The walking experience became safer and more comfortable. Railings were set up on the docks based on safety requirements，avoiding all the existed bollards. Instead of natural granite as the finish, the whole project uses materials including precast concrete or cast-in-place concrete, colored asphalt, which are close to the texture of the old dock and bring a holistic and continuous paving effect.

The most distinctive part of the site is the Salvage Bureau, which was once the factory of Xiangtai Wood, founded in 1902. However, the old buildings are no longer in existence. The factory boundary was partially reconstructed based on historical maps. The company's memorabilia are displayed in the detail design with pictures and sculptures, and it is integrated into the park greening as an outdoor exhibition place. In the green space, history is no longer presented to visitors in a serious but more friendly way.

By scanning the QR code on the wall or on the bench, visitors can get more information and stories about the featured points. The way of technology increases the interaction between people and landscape.

Combined with the stepped benches under the cherry trees, the high-pillar dock turns into an amphitheater stage, and the granary-renovated art gallery on the other side of the river becomes the backdrop, The seats made of wood and precast concrete are all placed facing the river，surrounded by elegant plants, making open-air movies and running parties held on summer night's full of appeal. An emergency way dedicated to the Salvage Bureau is integrated with the amphitheater as an accessible ramp. The gap between the high-pile dock and the land is linked by a steel grille trail, which can directly observe the tidal changes and hear the sound of the waves.

Floodwall and Park
The landscape architect cooperated with the water conservancy engineer to transform the original single floodwall into a two-level system. The top of the first wall is same as the preserved high-pile dock ground elevation, forming a continuous activity space. The second wall is raised a 1000-year standard, which position is 20~30 meters back and completely hidden under in landscape topography, covering with soil and planting. With a 6% grass slope facing the river, people can comfortably see the beautiful city skyline of the Huangpu River. The new flood control system enriches the landscape topography changes in a flexible manner while reducing the threat of typhoons and rainstorms.

The green space between the city road and the floodwall is designed as a rain garden which alleviating the burden of the municipal drainage network during storm，which makes the hard-concrete walls no longer a negative factor. In addition, an underground rainwater harvesting device provide irrigation water for the park. As a space for ecological education, the wooden elevated trails and platform nodes under the tree can help people understand the meaning of sponge city.

In order to create a better visual corridor to the river，the planting design focuses on two levels in the vertical direction. The upper level is mainly arbor, with local species that can grow stably and resist typhoon. The understory level is a variety of Herbaceous plants, with the dynamic landscape of the river wind, which makes an interesting contrast with the heavy industry. The riprap and reed plants on the shore between the high-pile dock and the land are used to slow the impact of the water on the river bank.

Part of the high-pile dock expands planting space with weather-resistant steel plate. Designers changed the hard-ground image of most factory and the docks, increasing the green coverage rate from less than 5% to 65%，creating a green park experience.

Project Review
Compared with other landmarks along the Huangpu River of Shanghai, such as the Bund and the Lujiazui CBD, the Yangpu Riverfront section is well known as the birthplace of China’s modern industry. Historically, it has gathered many factories, warehouses and docks. The process of industrialization has led to the aging of adjacent communities and the lack of public space. The challenge of the 1.2km shoreline site is that the recession industrial belt blocks the access to the riverside and the threat of typhoons and floods.

A multi-disciplinary team based on landscape architects has established a multi-level greenway system from the industrial legacy, extending to the city through a pedestrian network. The riverfront space defined as a city grandstand transforms into a new attraction that meeting daily use and various events, and enjoying Shanghai's beautiful skyline. On the first opening day, it welcomed nearly 20,000 visitors, including those who had worked in the factories before. The revitalized riverfront has truly returned to the public with the coexistence of industrial legacy and natural park. 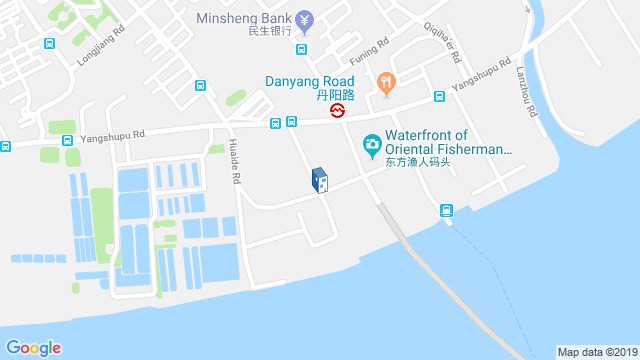 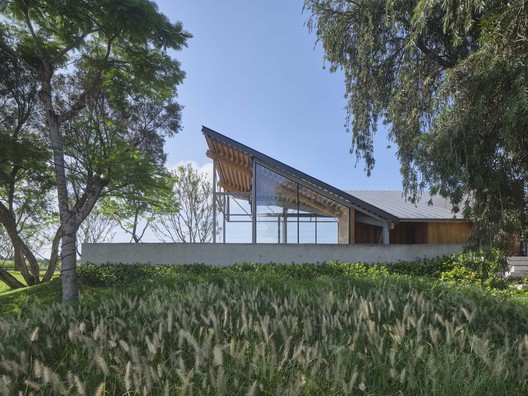 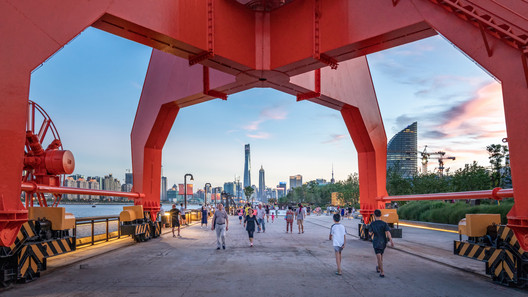 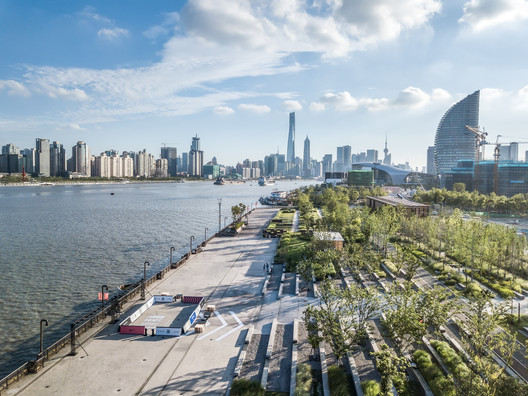