Save
Perched Over 2,000-Year-Old Roman Mosaics and Ruins, This Hotel Takes a Bold Approach to Historic Preservation
Share
Or
Copy

This article was originally published on Metropolis Magazine.

The urban surfaces we walk on, planed sidewalks cleared of debris or asphalt streets kept in good repair, are simply the topmost layers of human-churned earth extending sometimes hundreds of feet belowground. In some cities, digging downward exposes dense infrastructure networks, while in others—Antakya, Turkey, for one—construction workers can’t turn over a rock without uncovering priceless relics. The newly opened Antakya Museum Hotel, designed by the firm EAA–Emre Arolat Architecture, has turned one such discovery into a bold new strategy for historic preservation.

Catering mostly to tourists, including pilgrims to Saint Peter’s Church on nearby Mount Starius, which some claim housed the first Christian congregation, the 199-room hotel seems to hover above the ground. Its prefabricated guest rooms are arrayed like shipping containers beneath a flat, razorlike roof that slices into views of the surrounding mountains. But on closer approach the solid ground gives way to a subterranean landscape of rubbled streets, walls, and ancient mosaics, among the largest in the world.

This stone labyrinth is a section of late-Roman Antioch, a particularly multi-cultural corner of the Mediterranean during antiquity, where Latin, Greek, and Aramaic speakers traded gold, spices, and religions. Exposing the ruined urban fabric’s wide footprint impels one to imagine a metropolis beneath the contemporary city of about 210,000: Under every house, school, and store lies its 2,000-year-old counterpart.

One also wonders why the client and architect decided to drop a new-build onto such a sensitive site, knowing that this would throw a wrench into the project’s time frame and budget, while also risking damage to fragile treasures. But according to Özge Ertoptamış, a director at EAA’s New York office (it also has bases in Istanbul and London), it would have been riskier to do nothing at all. “In similar sites and similar situations, it is very common for archaeological findings to be covered over and forgotten,” she says. “These precious parts of history would never have made it to the surface without this project.”

A tremendous degree of coordination was needed to build the ambitious structure, which covers an area of 366,000 square feet. EAA became involved in the project in 2009, only after archaeological discoveries rendered a previous hotel design obsolete. But the firm’s own project was soon stalled by additional dig findings, which prompted significant changes in the plans. All the while, official buy-in was withheld; the EAA team had to make its case to multiple government ministries, local government officials, and archaeology experts one by one. The challenges were overwhelming but also tantalizing, Ertoptamış recalls.

The firm grappled with how best to highlight the presence of the antiquities, choosing to contrast them with the armatures and techniques of latter-day industry. This plays out in the museum space of the project, where the glassed-off ruins double as a Portmanesque atrium for the hotel. The attempt to heighten the latent meaning of the site is a habitual approach for EAA, Ertoptamış says: “We look at the traces—sometimes visible, sometimes discovered, sometimes implied and made visible, and sometimes a feeling of presence for things that are lost. We want our buildings to be connected to the history and sense of a place.”

At the Antakya Museum Hotel, this contrast largely works to great effect, though at moments it becomes heavy-handed. Massive steel columns, few and far between, touch down only where there aren’t ruins, in the spans between fragmented walls and in erstwhile courtyards. The guest rooms sit heavily atop this cumbersome skeleton, while the expansive roof canopy looms like an anvil over the industrial tangle of beams and prefabricated volumes. The effect is somewhat claustrophobic, the pile of rooms above rendering the space beneath both chaotic and cavelike.

But certain aspects of the design, including the formal echo between the ruined rooms below and the stacked blocks above, are more conceptually continuous, bringing aspects of old Antioch into the present. Even the overall formal gesture—an agglutination of simple forms huddled under an elevated plane—is reminiscent of tells and höyüks, artificial landforms concealing strata of ancient constructions, which are common in the area.

Despite its heft, the building never gets trapped in the severe, blocky language so common in contemporary architecture. There is a tremendous dynamism to the structure, delivered mostly through the tectonics of steel: The position of the ruins dictates a jagged axis through the center of the building (following a desiccated streambed). A suspended walkway leads members of the public through the cavernous museum. With beams and columns crossing the space at various levels, and hidden rooms jutting out over crumbling walls, the museum space brings to life Piranesi’s Carceri drawings.

“Wherever one stands in any part of this structure, it is light, and it is this tension between light/present and dark/past that is presented,” Ertoptamış says. At once industrial and ancient, made by machine and carved by hand, the Antakya Museum Hotel renders history palpable by forcing disconnected eras into dialogue. 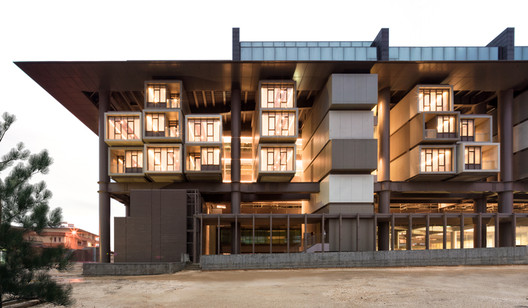