✕
Save
“As Architects, We Should Be Confident in Our Work”: In Conversation with Weiping Shao of Beijing Institute of Architectural Design and UFo
Share
Or
Copy 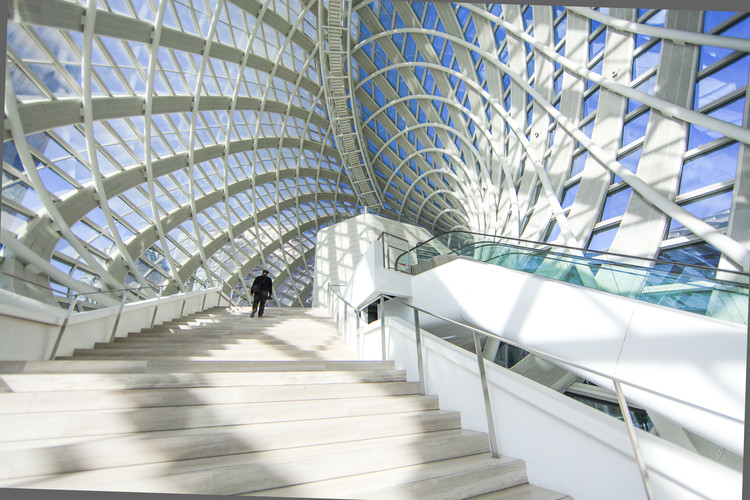 Contemporary Chinese architects can be divided into two main categories. One is a huge network of government and university-owned design institutes and the other –independent, privately-run architects’ studios, a phenomenon that was started by Beijing-based architect Yung Ho Chang when he opened the very first such practice in 1993. While it is these independent architects that succeeded in producing many, mostly small-scale original works that collectively established a new architectural identity that is unmistakably Chinese, it is the design institutes that produce the greatest bulk of the built environment in the country. For this reason, I wanted to talk to Weiping Shao, the Chief Executive Architect of the Beijing Institute of Architectural Design, BIAD. In a way, Mr. Shao is the chief architect of the Chinese capital. He also serves as the Executive Director of the Architectural Society of China. Shao graduated from Tongji University in Shanghai in 1984 with a master’s degree. Apart from heading BIAD’s design efforts, the architect is the head and leading designer of his 30-architect studio called UFo, which was founded in 2003. We met at Shao’s office, full of international magazines and with an expansive view over Downtown Beijing and spoke with the help of translator and architect Zewo Zhou who works at the studio.

Vladimir Belogolovsky: I read that the design of your Phoenix International Media Center is based on the logo of Phoenix Satellite Television, the project’s client and China’s biggest private broadcasting company. Could you talk about this building’s design?

Weiping Shao: Well, the logo was only an inspiration for this project. But the concept of the design comes from the thinking about the site and building functions which is a careful and thoughtful process. But the design and concept for the center come from the site and program, which is quite complex. Many specifics were analyzed and factored into the final design. The form is not the only thing that we were focused on. We focus primarily on the rationality of functions, the adaptability of site conditions and the experience of people in the space.

VB: So, this building, a ballooning torus, formed by a lattice of steel pipes that twist in seemingly every direction, is not about the form. Do you expect me to believe that? You cite the site, a flat, one of the numerous featureless intersections in the middle of Beijing as an inspiration for this building’s design? And what if I say that this building could be anywhere?

WS: [Laughs.] You are right, this building’s form is very expressive and distinctive. It is inspired by the logo of phoenix tv and Mobius Strip, but the conditions of the site have also a lot to do with it. On the one side it faces an urban public green space with a lake and on the other – there is a curved street. The characteristics of the site are fully utilized by us. We wanted to for this building to have a dialogue with nature. Therefore, this building’s design is beyond the logo. The double form is based on our desire to unite two buildings by a single exoskeleton; it was our response to the client’s requirement to separate two functions – offices and broadcast studios. That enabled us to allow for a large public space between the two buildings. That semi-interior space provides a uniquely technological and futuristic experience.

VB: The Beijing Institute of Architectural Design (BIAD) is owned by the state and it was established from the very beginning, in 1949, the year the People’s Republic of China was founded. Could you talk about the role of the Institute?

WS: BIAD is one of the most important design institutes in China. In the first 30 years a very high proportion of Beijing construction market was realized by BIAD. And almost all of the iconic buildings that were built in Beijing in those years were designed here. So, you can’t separate the history of the Institute from the history of Beijing. After 1978, when China has opened up to the world, our share of buildings designed here in the capital was greatly reduced. Since then we had to start competing with foreign architects coming to China, as well as with other institutes here in China. Right now, we design less than three percent of all buildings that are being planned in the city. Our most exemplary projects include urban planning of Tiananmen Square, Beijing Opera House that was designed by Paul Andreu who won an open international competition, and many of the buildings for the 2008 Summer Olympics. We also designed both airports – the existing Beijing Capital Airport Terminal 3, in cooperation with Norman Foster and the new one, Daxing International Airport that was designed in cooperation with Zaha Hadid. BIAD is involved in all of these projects. For this reason, we have a saying in Beijing that if you like to know the history of the development of modern Beijing you should come to our institute. [Laughs.]

VB: Is BIAD a regional institute or is it active outside of Beijing as well?

WS: Early on we were only working on projects in Beijing but since China’s opening up to the world we developed new branches in the west, south, and east of China. We also started an international business in such places as Africa and the Middle East. We provide design services for the construction in different countries. At present, the main business is still concentrated in the field related to Chinese enterprises. The proportion of purely commercial projects is not high.

VB: Many of China’s design institutes were set up in 1958 as part of the national university system. How are they different from BIAD?

WS: Our Institute is owned by the state. Design institutes on the scale and influence of our organization are rare in China. There are only a few such institutes. There is the China Architectural Design and Research Group, which belongs to the central government. They are located here in Beijing but most of their projects are all over the country. There is also a large-scale East China Architectural Design & Research Institute based in Shanghai. Our three institutes are similar in scale. In addition, there are several large design institutes based on campuses of our leading universities. They also have strong experiences and built excellent projects. Although we are very competitive, we are all good friends. [Laughs.]

VB: Apart from being the chief architect at the Institute, you head your own design studio here called Un-Forbidden office or UFo. Could you talk about your studio and its unconventional name?

WS: Our Institute has over 3,000 people, half of whom are architects. UFo is the core design team in BIAD; we have 30 architects here. The studio name Un-Forbidden office comes from one of our conceptual projects. It was picked in opposition to the Forbidden City. We wanted to express our studio's innovative and open design attitude.

VB: Could you talk about your collaborations with such foreign architects as Norman Foster, Zaha Hadid, Rem Koolhaas, and KPF?

WS: Ever since China opened to the West we have been collaborating with world-class foreign architects. For example, in addition to the architects you just named, we collaborated with Frank Gehry on the new National Gallery competition project. Gehry was here and we worked closely with him. Unfortunately, we lost that competition to Jean Nouvel design consortium in the final round. That project is now under construction.

VB: And who was collaborating with Nouvel?

WS: Another studio from BIAD is now collaborating with him. They are right down the hallway here.

WS: It was an internal competition and the studio that worked with Jean Nouvel design consortium won. Our team did not win. [Laughs.] Gehry chose our studio based on our Phoenix Center and our experience of complex buildings, including the new airport and Galaxy SOHO; on both projects we collaborated with Zaha Hadid. I’ve been collaborating with foreign architects since 1996, when I worked on a project with SOM. At that time there was a huge gap between us and them, but now it is much less, and we can collaborate more effectively. We are dedicated to make the quality of our buildings very high. This is the most significant influence of foreign architects on me personally and on the Institute overall.

VB: What do you think about some of China’s independent practices? Do you view them as competitors?

WS: Of course, we are competitors, but I think it is very good for Chinese architecture. Overall, this kind of competition is positive. It promotes the improvement of Chinese architectural creation. The current Chinese construction market is strong enough to accommodate these new competitive partners. More importantly, this kind of competition has brought diversity to Chinese cities. And on a number of occasions, we collaborated with these architects and we support each other. In particular, our engineering consulting team often provides technical consulting services for them.

VB: Your Phoenix International Media Center is explicitly an iconic structure. This building type was questioned by President Xi Jinping a couple of years ago. What do you think is the future of the iconic buildings here in Beijing?

WS: We all studied in depth President Xi Jinping’s speeches on this subject, but we don't think Phoenix Center is the kind of building he criticized. President Xi did not mention specific buildings when he delivered his speech. He only expressed his concern about the building which only cares about the form but lack of substance. We believe that the problem that President Xi criticized exists, but we cannot speculate on his point of view and misunderstand his speech. The association may be speculated by the media. As architects, we should be confident in our work.

Beijing is preparing for the 2022 Winter Olympics. Many innovative architectural solutions are being intensified. I believe that these new buildings must be iconic in the future. For example, we are going to have a new speed skating pavilion for the 2022 Winter Olympics. The building is very dynamic and energetic. People already nicknamed it as “Ice Ribbons.” The project was successfully approved by the government and won many praises. Similarly, the terminal building of the Beijing New Airport is also a futuristic building that is about to be put into use.

NewsArticlesInterviewsVladimir Belogolovsky
Cite: Vladimir Belogolovsky. "“As Architects, We Should Be Confident in Our Work”: In Conversation with Weiping Shao of Beijing Institute of Architectural Design and UFo" 11 May 2019. ArchDaily. Accessed . <https://www.archdaily.com/916526/as-architects-we-should-be-confident-in-our-work-in-conversation-with-weiping-shao-of-beijing-institute-of-architectural-design-and-ufo> ISSN 0719-8884
Read comments
Save 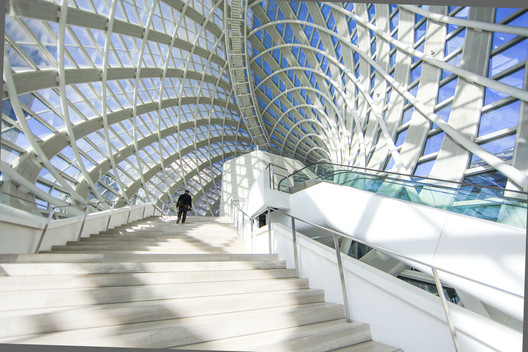